Nickelodeon
Register
Don't have an account?
Sign In
Advertisement
in: The Fairly OddParents characters, Males, Characters,
and 6 more

"I know a lot of words since I just ate a dictionary."

Sparky was a main character on The Fairly OddParents in the show's ninth season. He was a talking fairy dog adopted by Timmy Turner in the premiere episode of the season. However, due to negative reception by the public, he was quietly dropped from the show in the next season.[1]

He first appeared in "Fairly OddPet". Timmy noticed that he was the only one in Dimmsdale without a pet so he managed to convince his Dad to let him have a dog. Cosmo and Wanda poofed Timmy to the Fairy World pet store due to the fact that he was banned from all the regular pet stores. There, he picks out Sparky and they soon poof home although Sparky causes many problems. Sparky later overhears Timmy talking to Cosmo, Wanda, and Poof about how he wants to drop Sparky back off at the pet store, causing him to run away. Sparky is later found in Timmy's backyard when the Dimmsdale dam breaks causing Sparky to fall into the water. Timmy saves him and he promises Sparky he'll never give up on him again.

Sparky has yellow fur, except on his ears and the top of his head, that is orange. He has blue eyes and a star on his tail, which he uses as a wand.His character is modeled after Rick Moranis'Louis Tully character in "Ghostbusters" - a hangdog, hard-luck type who means well but is kind of a doofus.

Sparky is a cheerful fairy dog but is saddened, due to most of the people who adopt him being forced to take him back due to his craziness. He claims he is just doing "dog things" by chewing and digging and running around, sometimes causing trouble for both his owner(s) and others, such as their family members and the people that live in the same town. He sometimes leaves a nasty surprise for his owner(s) overnight because apparently fairy dogs do not sleep and he just does those "dog things", as mentioned earlier.

Being a fairy dog, Sparky can do magic just like any other fairy and he uses his tailwand to do so. However, instead of world-changing magic in line with the chaotic wishmastering of Cosmoand Wanda, Sparky possesses "dog magic," allowing him to conjure up bones, fire hydrants, and the like. Some of his misadventures include afflicting Timmy's hometown with magical fleas (Fairly OddPet) and wishing himself into a real boy (A Boy and His Dog-Boy). According to show's creator, Butch Hartman, "He doesn't really add much magic-wise, but he does add a lot character-wise.Although Sparky is a protagonist in the show. He has shown a few villainous qualities over the ninth season. In "Fairly OddPet", he digs up the whole town, causing chaos everywhere. In "Finding Emo", he asks Timmy to help him bury a bone and a bag of evidence. He claims he doesn't want the FBI to find it before walking away slowly.

In "Turner Back Time", Sparky is revealed to be a member of The Dog Uprising, an operation where dogs try and take over the humans. At the end of the episode, a few dogs are seen replacing a statue of the mayor with a statue of Sparky. In "Man's Worst Friend", he gives Timmy's parents a giant bag of money to cheer them up from the lottery being canceled. This initially appears to be a heroic act but when Timmy asks where he got the money from, Sparky nervously tells to him to go with "I just found it", implying he stole it. Sparky's voice actor has admitted to pushing for more of these scenes as a way to make his character more interesting.

Sparky in "Force of Nature" 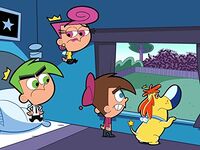