Spiffy
Rugrats and All Grown Up character

A Tale of Two Puppies

Spiffy is a perky little pup and child of Fifi and Spike. He was adopted by the Pickles family and makes his first appearance in "A Tale of Two Puppies", alongside his sister, Pepper.

Spiffy is a wild, rambunctious puppy. He first appears in A Tale of Two Puppies. He and his sister Pepper are the last two puppies in the litter left to find homes. Stu wants to keep Spiffy, but Didi doesn't. He trains Spiffy and Didi finally lets Stu keep him. 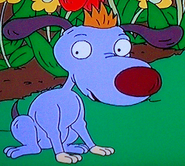 Add a photo to this gallery
Retrieved from "https://nickelodeon.fandom.com/wiki/Spiffy?oldid=259870"
Community content is available under CC-BY-SA unless otherwise noted.