This show has a wiki of its own: Encyclopedia SpongeBobia.

SpongeBob SquarePants, often referred to as just SpongeBob, is an animated television series created by marine biologist and animator Stephen Hillenburg. The series premiered after the Kids' Choice Awards on May 1, 1999. It officially began airing on July 17th of the same year with the second episode "Bubblestand/Ripped Pants".

The main character is an accident-prone sea sponge, SpongeBob SquarePants, who lives in an underwater pineapple with his pet snail Gary. His neighbors are his best friend, Patrick Star, and a sour octopus named Squidward. SpongeBob works for a cheapskate crab named Mr. Krabs, who lives in an anchor with his whale daughter Pearl. SpongeBob is enrolled in a boat-driving school run by Mrs. Puff, a pufferfish, and often spends time with a thrill-seeking squirrel from Texas named Sandy. The villains of the show are Plankton and Karen, the owners of a failing restaurant called the Chum Bucket. Most episodes take place in the town of Bikini Bottom or on the surrounding sea floor.

The cartoon is designed to appeal to older viewers as much as to children. Underwater life and situations are represented, absurdly, as though they are almost equivalent to normal terrestrial lifestyles. Instead of cars, the residents of Bikini Bottom drive boats with wheels. A flurry of bubbles accompany many actions, to remind the viewer everything is underwater. Squidward lives in an Easter Island head and Patrick lives under a rock. The suggestion is that the characters' dwellings have fallen from a tropical island to become underwater habitats. Snails behave like cats, while jellyfish act like bees, worms are the undersea equivalent of dogs, and scallops are often likened to birds.

For several special episodes, the theme song was altered to fit the plot of the episode, such as in "Christmas Who?" and "What Ever Happened to SpongeBob?" 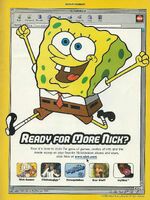 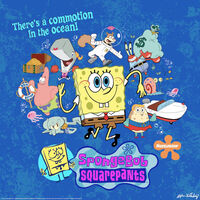 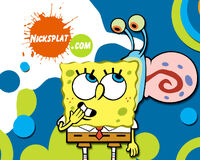 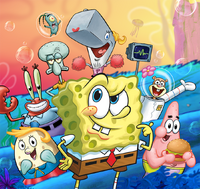 2016 promo art of the characters

The main characters
Add a photo to this gallery

Retrieved from "https://nickelodeon.fandom.com/wiki/SpongeBob_SquarePants?oldid=266134"
Community content is available under CC-BY-SA unless otherwise noted.