Being unable to work at the Krusty Krab, Gary's disobedience, bullies, getting hurt, being called a weenie, Plankton being selfish, anyone who ever tries to steal the Krabby Patty formula, Squidward's attitude, being captured and turned into one of The Cyclops's smelly knick-knacks, being fired, failing his driving tests, being separated from Patrick, Bubble Bass, losing his pineapple house, being framed

"I'm ready!"
"Good morning world, and all who inhabit it!"

SpongeBob SquarePants is the titular protagonist of the Nicktoon of the same name. He is voiced by Tom Kenny and first appeared on television in the series' pilot episode "Help Wanted" on May 1, 1999. SpongeBob was created and designed by former marine science teacher Stephen Hillenburg, who originally used the character in an educational book he wrote in the 1980s. Thanks to success and popularity of the franchise, SpongeBob has become a household name and the official mascot of Nickelodeon.

As shown in "The Secret Box", SpongeBob has known his best friend Patrick since they were both little babies. SpongeBob moved into his sunken pineapple house with his pet snail, Gary, one day after moving out of his parents' house. He later met his next-door neighbor, Squidward. His teacher is Mrs. Puff and his boss is Eugene Krabs.

SpongeBob is an excitable and charming young sponge. He and Patrick often annoy Squidward without really knowing it.

According to his driver's license in "Sleepy Time", SpongeBob was born on July 14, 1986—making him just thirteen years old as of the episode's airing in 1999.

Much of SpongeBob's early education is unknown; however, it was mentioned that his kindergarten teacher was Mrs. Shell. Also, he encountered a fellow elementary classmate named Dennis in "The Sponge Who Could Fly". He also mentioned that he was voted most clumsy in high school, and was never able to get a date for his junior prom.

SpongeBob is currently in boating school, run by his dedicated teacher Mrs. Puff. He knows every answer to Mrs. Puff's oral exams and is the most committed student in her class. However, SpongeBob's anxious nerves always take over when he gets behind the wheel of a boat, leading to his very frequent failures at passing the driving exam.

He still doesn't have his boating license.

For a long time, SpongeBob held a desire to work at the Krusty Krab. After a pep talk from Patrick, he decided to apply for a job as a fry cook to the restaurant's owner, Eugene Krabs. SpongeBob, being an excellent fry cook himself, wanted to master the art of creating a Krabby Patty. Mr. Krabs hired him, but first wanted to see how capable he was. He sent him to buy a hydro-dynamic spatula with port and starboard attachments (which would be seen occasionally in later episodes). To Mr. Krabs' shock, SpongeBob returned with said spatula in the nick of time (the Krusty Krab had been invaded by anchovies). SpongeBob fed all of them with Krabby Patties, and Mr. Krabs was extremely pleased. SpongeBob was hired soon after. He is also responsible for keeping up the good work at making Krabby Patties for the customers so he can satisfy Mr. Krabs with money he'll get when the people pay for the food.

He frequently gets days off at the Krusty Krab Restaurant, and as a result he spends his free time with his best friend Patrick Star, and especially enjoys practicing karate with his other friend Sandy Cheeks. He also likes eating jelly, and collecting the jellyfish at Jellyfish Fields. To date, he has caught, named, and let go every jellyfish in Jellyfish Fields at least once, except the blue jellyfish, until the end of the episode "Jellyfish Hunter".

SpongeBob is a yellow sea sponge with olive green holes. He wears brown pants, a white polo shirt, red necktie, white knee-high socks with red and blue stripes, and black leather shoes. He also has light blue eyes, with 3 eyelashes on each one, rosy cheeks with three freckles on each one, and a pink chin. His underwear consists of white cotton low-rise briefs.

From SpongeBob SquarePants: The Broadway Musical 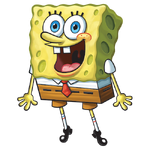 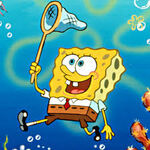 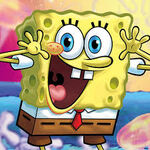 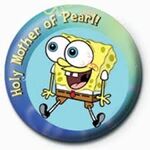 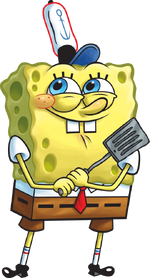 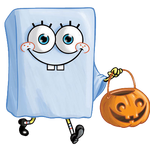 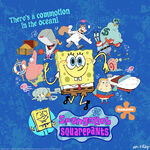 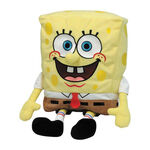 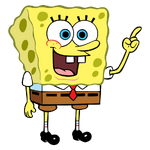 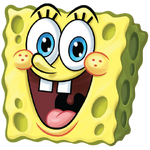 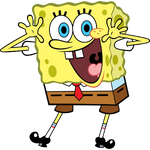 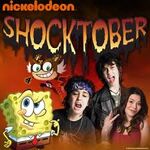 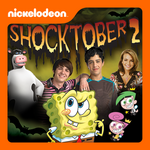 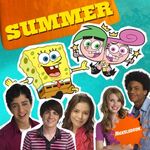 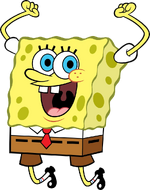 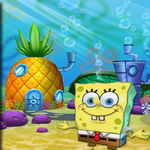