SpongeBob SquarePants is the main character of the Nickelodeon franchise of the same name. He is voiced by Tom Kenny and first appeared on television in the series' pilot episode "Help Wanted" on May 1, 1999. SpongeBob was created and designed by cartoonist Stephen Hillenburg, shortly after the cancellation of Rocko's Modern Life in 1996.

Before the series began he found a pineapple which he moved into with his snail Gary. He later met two next-door neighbors, Patrick Star and Squidward Tentacles.

SpongeBob is an excitable sponge who is best friends with Patrick, a rather dumb pink starfish. They often annoy Squidward without really knowing it.

The only official information to SpongeBob's pre-adult life is that he was born in 1986, according to his driver's license. Though, in the episode when spongebob learned "bad words" Mr. Krabs said he was 7 years old.

Much of SpongeBob's early education is unknown; however, it was mentioned that his kindergarten teacher was Mrs. Shell. Also, he encountered a fellow Elementary classmate named Dennis in "The Sponge Who Could Fly." He also mentioned that he was voted most clumsy in High School, and was never able to get a date for his Junior Prom.

SpongeBob is currently in Boating School. He has never passed the test, which annoys his teacher, Mrs. Puff, greatly.

SpongeBob expressed his desire to work at the Krusty Krab. To Squidward's distaste, he applied to Mr. Krabs, the owner, for a job as a fry cook. Spongebob, being an excellent fry cook himself, wanted to master the art of creating a Krabby Patty. Mr. Krabs hired him, but first wanted to see how capable he was. He sent him to buy a hydro-dynamic spatula with port and starboard attachments, (which would be seen occasionally in later episodes). To Mr. Krabs' shock, SpongeBob returned with said spatula in the nick of time (the Krusty Krab had been invaded by anchovies). SpongeBob fed all of them with Krabby Patties, and Mr. Krabs was extremely pleased. Spongebob was hired soon after.

SpongeBob is a yellow sponge with olive green holes, he resembles a kitchen sponge, he wears brown pants, white polo shirt, red necktie, white lanky socks that reach his knees and with red and blue stripes and black shoes. He also blue colored eyes, red cheeks and a pink chin.

He frequently gets days off at the Krusty Krab Restaurant, and as a result he spends his free time with his best friend Patrick Star, and especially enjoys practicing karate with his other friend Sandy Cheeks. He also likes eating jelly, and collecting the jellyfish at Jellyfish Fields. To date, he has caught, named, and let go every jellyfish in Jellyfish Fields at least once, except the blue jellyfish, until the end of the episode "Jellyfish Hunter". He also likes to blow bubbles, surf, sun bathe, and play the ukulele. His favorite TV show is The New Adventures of Mermaid Man and Barnacle Boy. SpongeBob is such a fan of the show that he and Patrick together brought them out of retirement. They also pretend to be Mermaid Man and Barnacle Boy. 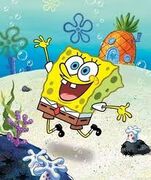 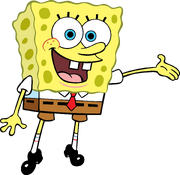 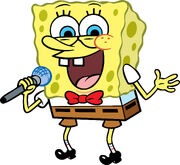 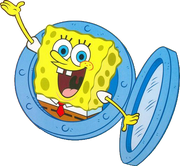 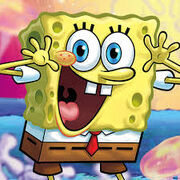 Retrieved from "https://nickelodeon.fandom.com/wiki/SpongeBob_SquarePants_(character)?oldid=116903"
Community content is available under CC-BY-SA unless otherwise noted.