"Back to the Past" (cameo)
"Code Yellow" (as Squidward's nose)

"That's right! I'm living your dreams, Squidward!"
Squilliam Fancyson III[1] is Squidward Tentacles' classy arch-rival on SpongeBob SquarePants. Squilliam attended Squidward's band class in high school and always puts him down. He is a very wealthy, snooty rival of Squidward who has succeeded in everything Squidward has failed at, and thus looks down at Squidward, for being just a lowly cashier in a greasy spoon. Squidward is painfully jealous of Squilliam's success and schemes constantly to show him he isn't a loser. As such, whenever Squilliam appears, Squidward usually ultimately comes out on top, though there are a few exceptions to this.

Squilliam's first appearance was in the Season 2 episode "Band Geeks", where he challenges Squidward to play his band at the Bubble Bowl, commenting that his couldn't make it. He also comments that he is living Squidward's dream. However, Squilliam shows up at the Bubble Bowl anyway just to watch Squidward blow it. However, at the end of the episode, Squilliam, painfully aware of how good Squidward's band's performance is, appears to have a heart attack and is rushed to the hospital, therefore allowing Squidward to achieve victory over him.

He later appears in "Squilliam Returns", in which he thinks that Squidward is the owner of a five-star restaurant. This time, however, Squidward fails to impress him when chaos erupts. He made more appearances in "House Fancy", "Professor Squidward", "I ♥ Dancing" and "Keep Bikini Bottom Beautiful", as well as in the video games Lights, Camera, Pants! and The Yellow Avenger and the storybook The Art Contest: No Cheating Allowed! (in which he was oddly depicted as having a mustache and a goatee instead of a unibrow). He also made cameo appearances in "Back to the Past" and "Code Yellow" (the latter episode marking his most recent appearance to date). 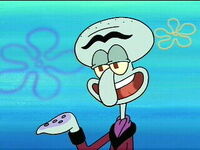 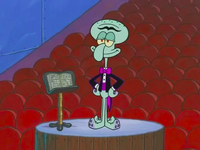 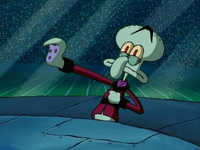