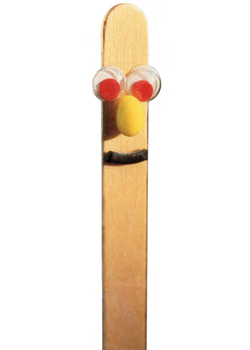 Stick Stickly was the mascot for Nickelodeon in the mid-1990s. He is a Popsicle stick with googly eyes, a yellow jelly bean nose, and a small mouth, voiced by Paul Christie.

Stick was best known as the host of Nick in the Afternoon, a programming block on the network that aired each summer from 1995 to 1998 on weekday afternoons. Stickly would often be subject to U-Dip, where viewers pick which substance he is dipped in or any substance at all using their bare feet.

In the fall of 1995, Stick starred in a series of shorts chronicling his search for his long-lost twin brother, Wood Knot. The shorts were then compiled into a half-hour special, Oh, Brother starring Stick Stickly, which aired Thanksgiving of that year. A second special, Stick Stickly in Stuck aired in the winter of 1996. Between the two specials, Stick also had a guest appearance in The Weinerville Election Special: From Washington BC.

Outside of Nick in the Afternoon and the two specials, Stick also served as the host for various special marathons, such as Nonstop Nicktoons Weekend. He would also appear in "Stick Witness News" promos, in which he would give reports on shows being added to Nickelodeon's line-up, or let viewers know about contests or programming events they could write in to. His write-in requests always came in the form of this jingle:

After more than a dozen years off the air, Stickly would later be seen in various promos for the TeenNick programming block The '90s Are All That, including the music video for the block's anthem. On September 6, 2011, an ad aired announcing that Stick would be returning to television on Friday October 7, 2011 at midnight. The following week, it was announced via a separate ad that he would host every Friday for the block's version of U-Pick. On his debut night, it became apparent that his segments were adapted for his new target demographic.

For New Year's Eve 2011/12, Stick was joined by Wood Knot and former Nick Jr. host Face to host the block, but his appearances then went on hiatus after March 2012. He temporarily returned to host 1990s Game Show Week on August 5, 2013, then returned to U-Pick on a regular weekly basis in June 2015.

On February 8, 2016, the block's successor, The Splat, had a "U-Pick" week, where Twitter users could ask to play certain shows using the hashtag "UPickTheSplat". The whole event was hosted by Stick Stickly and featured classic Nick in the Afternoon "U-Dip" segments during commercial breaks. 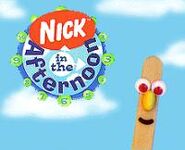 1996 print ad for Nick in the Afternoon.

Add a photo to this gallery
Retrieved from "https://nickelodeon.fandom.com/wiki/Stick_Stickly?oldid=257679"
Community content is available under CC-BY-SA unless otherwise noted.