Nickelodeon
Register
Don't have an account?
Sign In
Advertisement
in: Shows, films, and people with wikis, Cancelled shows, Live-action shows,
and 2 more
English

Talia in the Kitchen

The topic of this page has a wiki of its own: Talia in the Kitchen Wiki.

Talia in the Kitchen

Talia in the Kitchen is an American telenovela and teen drama that premiered on Nickelodeon on July 6, 2015. It is the United States adaptation of the Nickelodeon Latin American show Toni, la Chef.[1]

Talia Parra visits her grandmother in Miami for the summer. Using her late father's magical spices, Talia develops a passion for cooking and revives business in her family restaurant. 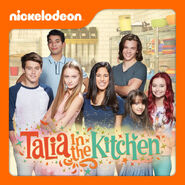