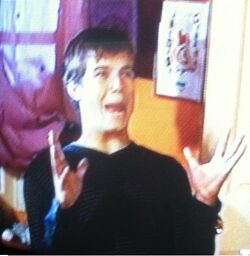 Taran Killam (born April 1, 1982) is an American actor and comedian best known for his television work on shows such as Scrubs, Wild 'N Out, MADtv and currently on Saturday Night Live.

He recurred on Nickelodeon's The Amanda Show in the Moody's Point skit as Spaulding, Moody's love interest. He later appeared on Drake & Josh as Trevor in the episode "Dune Buggy".

He is set to guest star on iCarly in the episode "iMeet the First Lady", as one of Michelle Obama's Secret Service agents.

He is known for voicing Zip "Frantic" Danger in the Hulu original series The Awesomes, and the titular character Nature Cat.

Retrieved from "https://nickelodeon.fandom.com/wiki/Taran_Killam?oldid=122163"
Community content is available under CC-BY-SA unless otherwise noted.