Nickelodeon
Register
Don't have an account?
Sign In
Advertisement
in: Singing Characters, The Backyardigans Characters, Characters,
and 7 more

"The Tale of the Not-So-Nice Dragon"

Tasha is the tritagonist of The Backyardigans. She is a fun-loving hippo who likes to play pretend with her friends. She is best friends with Uniqua. On occassion, she love to play girly games and talk fancy. Tasha is very intelligent, and likes to be in charge most of the time. Depending on what character she is playing, Tasha can also be a little bossy, although her best friends Pablo, Tyrone, Uniqua, and Austin don't mind this. Ultimately, Tasha knows how to have an exciting adventure, and her friends love and respect her very much.

Tasha is a yellow-skinned hippo with a red-pink tongue and two nostrils above her mouth. She wears a pair of red Mary-Janes and an orange dress with eight light-orange flowers printed on it in random spots.

Tasha's speaking voice was provided by Naelee Rae in the first two seasons and by Gianna Bruzzese in the final two seasons. Her singing voice was initially provided by Kristin Klabunde, with Gabriella Malek taking over during the third season and continuing to voice the character for the remainder of the series

Tasha lives in an yellow-colored house to the left of Pablo's home. It is visited the least out of the five main characters' residences. Whenever The Backyardigans are shown heading to Tasha's house for a snack, they walk behind Pablo's house to get there. 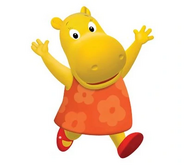 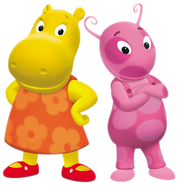 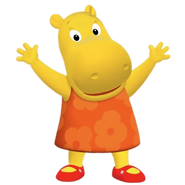 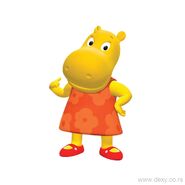 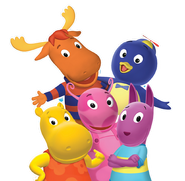 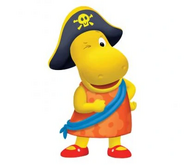