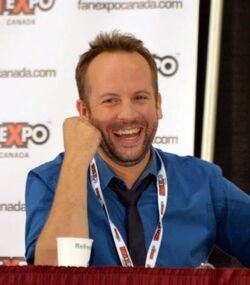 Teddy "Ted" Wilson is a Canadian television personality and producer originally from Ottawa, Ontario. He first gained national attention for his role on the successful internationally syndicated sketch comedy series You Can't Do That On Television. Today he's the host of the factual-entertainment series Never Ever Do This At Home (2012–present) on Discovery Channel in Canada and Spike in the United States, and host/segment producer on the Canadian daily entertainment talk-show InnerSpace on Space (2008–present).

Retrieved from "https://nickelodeon.fandom.com/wiki/Ted_Wilson?oldid=89373"
Community content is available under CC-BY-SA unless otherwise noted.