The topic of this page has a wiki of its own: Teenage Mutant Ninja Turtles Wiki.

The SpongeBob Movie: Sponge Out of Water
Teenage Mutant Ninja Turtles: Out of the Shadows

Darkness has settled over New York City as Shredder and his evil Foot Clan have an iron grip on everything from the police to the politicians. The future is grim until four unlikely outcast brothers rise from the sewers and discover their destiny as the Teenage Mutant Ninja Turtles. The Turtles must work with fearless reporter April O'Neil and her wise-cracking cameraman Vernon Fenwick to save the city and unravel Shredder's diabolical plan.

Following the news of the buyout, it was announced that Nickelodeon would produce a new film through Paramount Pictures with an expected release date sometime in 2012. In late May 2011, it was announced that Paramount and Nickelodeon had brought Michael Bay and his Platinum Dunes partners Bradley Fuller and Andrew Form on to produce the next film that will reboot the film series. Bay, Fuller, and Form would produce alongside Walker and Mednick. For the script, the studio originally hired Matt Holloway and Art Marcum to write the film for close to a million dollars. According to TMNT co-creator Kevin Eastman, the John Fusco version was a little too edgy for what Paramount wanted. A year later the Studio turns to writers Josh Appelbaum and André Nemec to rewrite the script. In February 2012, Jonathan Liebesman was brought in to negotiations to direct the film beating out Brett Ratner. Later in March, it was announced that Paramount had pushed back film's release date to Christmas Day 2013.

In early March, Michael Bay revealed at Nickelodeon's 2012 upfront presentation that the film will be simply titled Ninja Turtles and that the turtles will be "from an alien race". News of Bay's creative change was met with criticism from within the fan community. In response to the announcement, actor Robbie Rist who voiced Michaelangelo the first three films, wrote to Bay accusing him of "sodomizing" the franchise. Rist later remarked that he could have been out of line since Bay makes more money than he does. In response to the feedback, Bay issued a statement asking fans to calm down since a script had not been revealed, his team was working closely with the creators, and would include all the elements that made them fans to begin with. Both Brian Tochi, who voiced Leonardo in the first three films, and Judith Hoag, who played April O'Neil in first film, have voiced their support towards the creative change. Peter Laird expressed his thoughts on the change asking fans to take Bay's advice and wait until more of Bay's plan is made available. Laird also stated that he felt the "ill-conceived plan" could be a "genius notion", as it would allow fans to have the multitude of bipedal anthropomorphic turtles that they have been asking for. He would point out that while the concept of a turtle planet back story made for a great run of the mill science fiction story, it had no real place in the Ninja Turtles universe. The franchise's co-creator Kevin Eastman stated that he had been invited behind the scenes of the film, and concluded that he was officially on board with the project and that, although he could not say much, he believes it to be "awesome". Via Twitter, Corey Feldman, who voiced Donatello in the first and third films, voiced his support for the film saying that he loves Bay's remakes and he is eager to reprise his role. In response to the backlash, Liebesman stated that he was glad to hear about the fan's response, since he and Eastman had been locked in a room working on ideas that, from his own perspective as a fan, everybody will love. While he would not confirm whether or not Bay's comment did represent the film's premise, he did stress on the ooze itself and its background in the original comic, reminding that the ooze was the product of alien technology. In regards to how the Turtles would be rendered, Liebesman would not say exactly what visual direction would be taken, but he did state that he did enjoy Weta Digital's work in Rise of the Planet of the Apes. He also pointed out that the film would not be exclusively about action but will also focus on brotherhood, friendship, and responsibility.

In late March, Michael Bay posted on his website explaining the title change and stressing that nothing had changed regarding the Turtles. He stated the reason the title was shortened was a request by Paramount to make the title "simple". He continued that the Turtles were the same as fans remember and regardless of the title change they still act like teenagers. He urged everyone to give everybody who was involved a chance, as they had the fans interest at top priority and would not let anybody down. On June 12, Eastman revealed some of the things for the film stating that April would not be 16 years old like in the 2012 cartoon series, he feels Ken Watanabe would make a great Shredder, he would like to bring Reyes back as a Foot lieutenant, and martial arts wise they are looking at Fist of Legend and The Raid: Redemption. Three days later, it was reported that production for this project has been shut down. While the release date has been pushed back five months, the work stoppage for the film was said to be "indefinite". However, other sources say that the film will be released on May 16, 2014 due to problems in that script that need to be corrected. In July 2012, Eastman called it "easily the best Turtle movie yet". Jessica Biel told Collider that she would consider playing April O’Neil in the film. Kevin Eastman mentioned to Comic Book Resources that the movie is creating its own story but has to be true to the source material or else they will get "murdered".

An early version of the script, dated 1/30/12, titled "The Blue Door" and written by Appelbaum and Nemec, was leaked online. It features major changes to the origins: the Turtles hail from another dimension that consists of turtle warriors, Splinter is an alien from the same dimension as well, Shredder is "Colonel Schrader", a government agent who is secretly an alien who can grow blades from his body, "The Foot Clan" is just "The Foot", an elite Black Ops unit led by Col. Schrader, Casey Jones is an 18 year old security guard/amateur hockey player that finds the Turtles and is the focus of the movie, April is also 18 and is having relationship troubles with Casey because she is moving to New York due to an internship at CBS, Raphael is the comic relief instead of Mikey, and Mikey falls in love with a turtle woman from his home planet. A cease and desist order was sent by Paramount Pictures to a website that was hosting the script. Peter Laird read the script and commented on his blog that "all true TMNT fans should be grateful to the new 'powers that be' that they did not allow this wretched thing to go any further." On January 12, 2013, Production Weekly revealed the film will start filming in April 2013 in New York. Variety reported Megan Fox had been cast in the role of April after beating out Elizabeth Olsen, Jane Levy and Anna Kendrick. That same month, the studio pushed back the film's release, once again, date until June 6, 2014, and a new writer Evan Daugherty was brought on board. Peter Laird commented on the casting of Megan Fox on his blog saying "it is safe to say that there are probably hundreds of better choices for the role of April O'Neil." But that he couldn't get himself "too worked up about it".

Filming began March 22, 2013 in Tupper Lake, New York. On March 24, Deadline reported that Alan Ritchson, Pete Ploszek, Jeremy Howard and Noel Fisher were cast as Raphael, Leonardo, Donatello, and Michelangelo respectively. On April 2, 2013, Will Arnett was cast in an unspecified role. Shooting is scheduled to begin in April in New York City and at Jones Beach State Park on Long Island, New York. 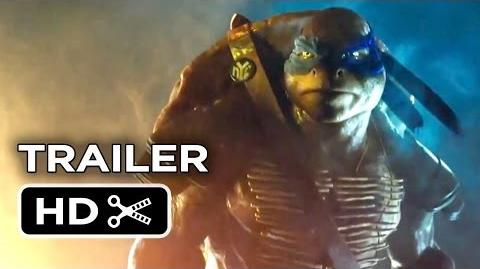 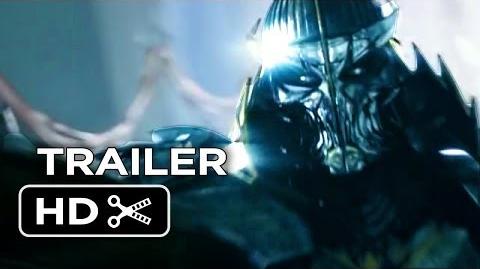 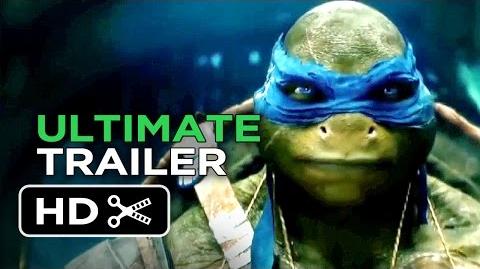 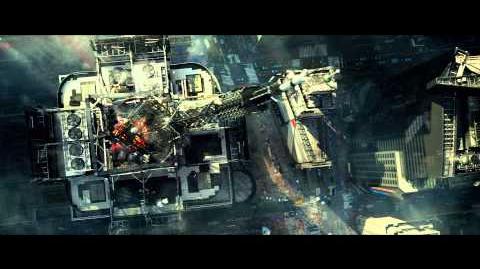 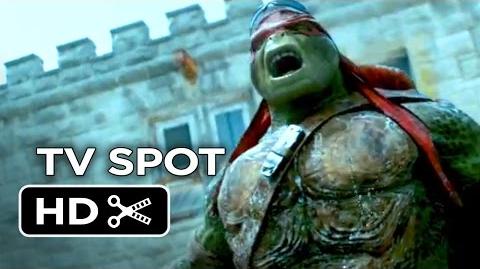 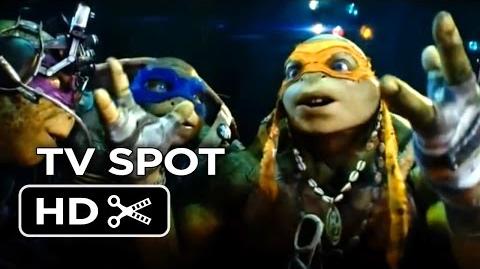 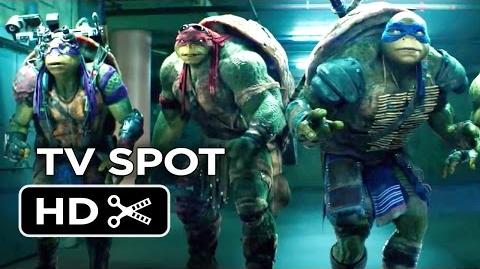 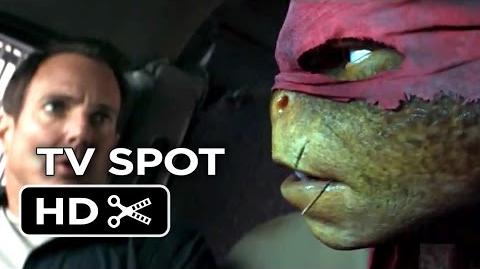 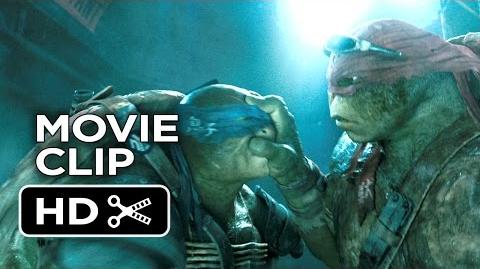 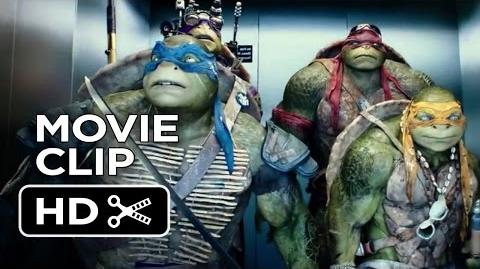 TMNT cast
Add a photo to this gallery

Shredder street poster
Add a photo to this gallery

Old logo
Add a photo to this gallery 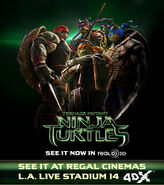 L.A. Live 4DX promo
Add a photo to this gallery

Retrieved from "https://nickelodeon.fandom.com/wiki/Teenage_Mutant_Ninja_Turtles_(film)?oldid=261915"
Community content is available under CC-BY-SA unless otherwise noted.