Nickelodeon
Register
Don't have an account?
Sign In
Advertisement
in: Shows with wikis, Live-action shows, 2020s premieres,
and 3 more

This show has a wiki of its own: That Girl Lay Lay Wiki.

"Who's Coming Out The App" by Alaya High

On August 7, 2021, Nickelodeon released a trailer for the series.

That Girl Lay Lay follows Lay Lay, the perfect hype girl and best friend that anyone could ever want from their personal affirmation app. Struggling to make her mark at school and needing a best friend to talk to, Sadie wishes upon a star that Lay Lay was real and could help teach her how to stand out. When her wish comes true and Lay Lay is magically brought to life, the two friends learn that when they are together, they can accomplish anything, and navigate life as teenagers and discover who they truly are. 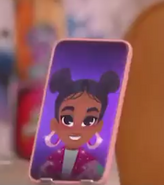 Lay Lay is Out the App