Fun Size
Prisoners of the Sun

The Adventures of Tintin is a 3D motion-captured animated film adaptation of the comic book of the same name.

Tintin (Jamie Bell), a young journalist, and his dog Snowy are browsing in an outdoor market in a European town (scene starts off with a cameo of Hergé doing Tintin's portrait). Tintin buys a model of a three-masted sailing ship, the Unicorn, on the cheap, but is then immediately accosted by the sinister Ivan Ivanovitch Sakharine (Daniel Craig), and the mysterious figure of Barnaby (Joe Starr), who both try to buy the model from Tintin, without success. Tintin takes the ship home, but it is broken during a fight between Snowy and a neighbor's cat. As it breaks, a parchment scroll slips out of the ship's mast. Snowy spots it but is unable to alert Tintin. Meanwhile, incompetent detectives Thomson and Thompson (Nick Frost and Simon Pegg) are on the trail of a pickpocket, Aristides Silk (Toby Jones). Tintin visits Sakharine in Marlinspike Hall, where he learns that there are two model ships. Tintin puts the scroll in his wallet, only to have his wallet stolen by Silk.

Later, Tintin is shot at, then abducted by accomplices of Sakharine, and imprisoned on the SS Karaboudjan. On board, Tintin escapes and meets the ship's nominal captain, Haddock (Andy Serkis). Haddock has been supplied with whiskey by first mate Allan (Daniel Mays), who is working for Sakharine, and the captain is permanently drunk, and doesn't know what's happening on board his ship. Tintin and Haddock (and Snowy) eventually escape from the Karaboudjan in a lifeboat. Sakharine sends a seaplane to find them, but Tintin is able to capture the plane, and fly towards the (fictitious) Moroccan port of Bagghar, but they crash in the desert.

Dehydrated in the heat, and suffering from a sudden lack of alcohol, Haddock hallucinates, and starts to remember stories about his ancestor, Sir Francis Haddock (Andy Serkis), who was captain of the Unicorn during the 17th century. Sir Francis' treasure-laden ship was attacked by a pirate ship, led by the masked Red Rackham (Daniel Craig), and, after a fierce battle and eventual surrender, Sir Francis chose to sink the Unicorn, and most of the treasure, rather than allow it to fall into Rackham's hands. It transpires that there were three models of the Unicorn, each containing a scroll. Together, the scrolls will reveal the location of the sunken Unicorn, and its treasure.

The third model ship is in Bagghar in the possession of the wealthy Omar Ben Salaad (Gad Elmaleh), but it is encased in a bullet-proof glass display case. Sakharine's plan is to stage a concert involving famous diva Bianca Castafiore (Kim Stengel), the "Milanese nightingale", whose penetrating singing voice will be able to shatter the glass case, allowing Sakharine's trained hawk to fly down and steal the third scroll. After a chase down to the harbor, pursued by Tintin and Haddock, Sakharine finally escapes with all three scrolls. Tintin chases him back to Europe and arranges a police reception for him on the dockside. Haddock and Sakharine, who is revealed to be the descendant of Red Rackham, replay their ancestors' swashbuckling sword fight, using dockside cranes, swords, and even bottles of whiskey. Haddock is eventually victorious and Sakharine is promptly arrested by Thomson and Thompson.

With the three scrolls in their possession, Tintin and Haddock find that the indicated location is Marlinspike Hall, and that the hall had been built originally by Sir Francis Haddock. There, in the cellar, they find some of the treasure, and a clue to the location of the sunken Unicorn. Both men agree to continue the adventure.

The Adventures of Tintin received generally positive reviews from critics. Based on 195 reviews collected by review aggregate site Rotten Tomatoes, the film scored a 75% "Certified Fresh" approval rating, with an average rating of 7/10. The site's critical consensus is, "Drawing deep from the classic Raiders of the Lost Ark playbook, Steven Spielberg has crafted another spirited, thrilling adventure in the form of Tintin."[1] Metacritic, another review aggregator which assigns a weighted mean rating out of 100 to reviews from mainstream critics, calculated an average score of 68, based on 40 reviews, which indicates "generally favorable reviews".[2] 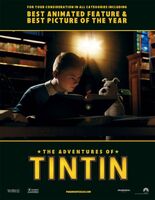 "For Your Consideration" poster

Teaser poster
Add a photo to this gallery

The topic of this page has a wiki of its own: Tintin Wiki.

Retrieved from "https://nickelodeon.fandom.com/wiki/The_Adventures_of_Tintin?oldid=273772"
Community content is available under CC-BY-SA unless otherwise noted.