The Boy Who Cried Werewolf

The topic of this page has a wiki of its own: The Boy Who Cried Werewolf Wiki.

The Boy Who Cried Werewolf

Jordan Sands is an allgery-prone, awkward, nerdy teenager who has to be the woman of the house since her mother's death and her widowed father is struggling with her younger brother, Hunter Sands with his gory pranks. The family goes to Wolfberg to honor the famous Wolfbergs Beast. As they meet the strange and steely housekeeper, Madame Varclaoc. The Sands' visit goes awry when a freak lab accident in which a vial of LB-217, in which Jordan steps in as Hunter gets the vial shard out of Jordan's foot And starts developing into a transformation into a werewolf.

The movie was released as a manufacture-on-demand DVD, sold exclusively on Amazon.com, on November 8, 2013. A Blu-ray release followed on December 4, 2015. Unfortunately, both discs were discontinued on June 4, 2021. 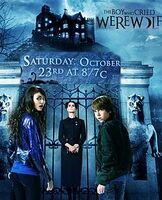 The cover to the DVD release.