Nickelodeon
Register
Don't have an account?
Sign In
Advertisement
in: The Fairly OddParents characters, Humans, Males,
and 6 more

The Mayor of Dimmsdale
The Fairly OddParents character

"Citizens of Dimmsdale, as your Mayor-For-Life... Ha! Gotta pay attention to those ballots, people."
The Mayor of Dimmsdale is a recurring character in The Fairly OddParents, who is often accompanied by the city's mascot, Chompy the Goat.

The perpetual mayor of Dimmsdale, he is like the citizens of his town in that he is not very bright. He is very unqualified for his job, and often accepts bribes or succumbs to blackmail, and is usually coerced into helping villains like Vicky. He was apparently elected to a dictator position, holding the term of Mayor for life, although thankfully he is too incompetent to be a threat to anyone.

He is short and balding, with gray hair, and wears a light blue suit. He is very short in comparison to other adults, and is in fact closer to Timmy's height. He wears a banner across his chest which reads "Mayor". He is usually seen with his good friend, and mascot of Dimmsdale, Chompy the Goat. In one episode, Chompy became very angry with the mayor when he learned that the Mayor enjoyed eating goat meat. As it seems, he still has strained relations with Chompy after the Exposé of his praticipation in the Goat Meat Convention.

The Mayor of Dimmsdale was first introduced in the episode "Dream Goat!", giving a tour of Dimmsdale City Hall to Timmy, Vicky, and several other kids. When Cosmo remarked that Chompy the Goat was smelly and old, the Mayor overheard this and blamed Timmy, yelling at him to "beg Chompy for forgiveness". Instead, Timmy wishes to set Chompy free and Vicky was blamed for it and arrested, with Timmy being declared a hero for stopping her. At a later ceremony for Timmy, the Mayor and his assistant, the Miss Dimmsdale contestant winner, were among those present when Timmy admitted his guilt. The Mayor seemed like he was about to forgive Timmy at first, but suddenly turned the crowd against him. The Mayor and his angry mob chased and cornered Timmy, but they were stopped by Chompy and his mateand family. Seeing how happy that Chompy was being free and with a family, the Mayor agrees to let Chompy come and go to the city as he pleases. Despite Timmy doing a good thing for Chompy, he ends up getting grounded for lying in the first place about it. In later episodes, Chompy and the Mayor are seen as friends, although Chompy's family is never seen again.

According to "The Secret Origin of Denzel Crocker!", the Mayor has apparently being ruling Dimmsdale since the 1970s. He introduced Denzel Crocker to the town during his "Denzel Crocker Day" speech. Judging by the ages of other adult characters at the same time, the Mayor is likely in the same generation as Dolores-Day Crocker and Nanette Ubetcha, and thus much older than Mr. and Mrs. Turner.

A simiar looking Mayor was seen as the ruler of colonial-era Dimmsdale hundreds of years ago, during the episode "Which Witch Is Which?". Like the other townspeople, the Mayor was easily swayed by Alden Bitterroot's witch hunting schemes until Timmy exposed Alden as a witch himself. The Mayor eventually named the town Dimmsdale after Dale Dimm, whom had stomped on Alden and stopped him. It is possible that the modern day Mayor is a direct descendant of the Olde Mayor, but it is never elaborated upon.

In "Vicky Gets Fired", the Mayor was kicked out of his office thanks to a blackmail by Vicky, who was looking for a new job. Vicky showed pictures of the Mayor at a goat-meat-eating convention, which upsets Chompy, and the Mayor was chased out of City Hall as he begged for forgiveness. He is eventually reinstated as mayor, although the damage caused between him and Chompy caused him to seek out psychological help from Dr. Phyllis Fancyfree in "Crocker Shocker". Dr. Fancyfree insured the mayor that she'll fix all that by hypnotizing Chompy to forget that he found out that the mayor ate goat meat at a goat meat eating convention.

The Mayor also has a minor role in the "Fairly Odd Movie". Thirteen years later, he is still acting as Mayor and still has Chompy as a best friend. The Mayor and Chompy are seen in the dilapidated Dimmsdale Park alongside Hugh J. Magnate Jr., who was announcing his plans to tear down the playground and redevelop it into a hotel/oil-well monstrosity. The Mayor seems to support Magnate's efforts, mainly because they will bring him and the city money, but is otherwise indifferent to Tootie's protest to stop the destruction of the park. He is portrayed in live action by Serge Houde. 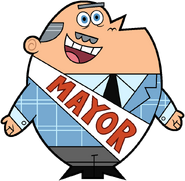