Nickelodeon
Register
Don't have an account?
Sign In
Advertisement
in: Shows, films, and people with wikis, Noggin, Programming blocks, Channels

The topic of this page has a wiki of its own: Noggin Wiki.

The N was a block on Noggin (hence its name, which stands for Noggin) aimed at pre-teens and teenagers. It aired daily from 6 PM to 6 AM. The block was created to air all of Noggin's older-skewing shows after the daytime block changed its target audience from tweens to preschoolers. Noggin's A Walk in Your Shoes, Big Kids, and Sponk! all shifted their timeslots to air during The N.

The N premiered on April 1, 2002, when the Noggin channel was co-owned by Nickelodeon and Sesame Workshop. As a result, some of Sesame's archive programming was shown during The N, like Ghostwriter. Noggin LLC produced some original shows specifically for The N, including the animated series O'Grady and the drama South of Nowhere.

Although Sesame Workshop sold their stake in Noggin in late 2002, Noggin/The N continued to air Sesame-produced shows like Out There through 2004. The N block was advertised as educational, just like Noggin's preschool block, and it was managed by the same team that created Noggin's preschool shows. The N block's educational curriculum was based on teaching life skills for teenagers and adults.[1] The N's educational focus made it stand out from other teen and adult brands, which mostly focused on non-educational sitcoms.

Between shows on The N block, Noggin aired a variety of shorts. Some of these shorts were reused from Noggin's days as an older-skewing channel. For example, Noggimation and Radio Noggin shorts were often aired, with The N's logo plastered over Noggin's. Other shorts were made specially for the block, including many station IDs about hands.

On December 31, 2007, The N block moved from Noggin to a new channel. The new channel was named after The N, but it was not a 24-hour version of The N's content. The channel aired TEENick shows during the day and limited The N's content to a nighttime block,[2] just like on Noggin.

The N's shows were gradually phased out as TEENick series overtook the new channel's schedule. This made it easier for Nickelodeon to remove The N's branding and replace the channel with TeenNick. The TeenNick channel launched on September 28, 2009, and it was based on the TEENick block: it was named after TEENick, continued TEENick's promotions, and was hosted by TEENick's former host Nick Cannon. The channel had no educational curriculum and no involvement from The N's crew members at Noggin LLC. TeenNick aired sparse "throwback" reruns of The N's series until 2015, when they were all removed.

The original logo for The N, used on Noggin's first announcement from January 2002 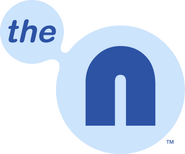