Nickelodeon
Register
Don't have an account?
Sign In
Advertisement
in: Shows, films, and people with wikis, Shows, Live-action shows,
and 5 more
English

The topic of this page has a wiki of its own: The Secret World of Alex Mack Wiki.

The Secret World of Alex Mack is an American television series that ran on Nickelodeon from October 8, 1994 to January 15, 1998, replacing Clarissa Explains It All on the SNICK line-up.

It also aired on YTV in Canada and NHK in Japan, and was a popular staple in the children's weekday line-up for much of the late '90s and early 2000s on the Australian Broadcasting Corporation. Repeats of the series aired in 2003 on The N, but it was soon replaced there. The show is currently not on the air in the United States. The series was produced by Thomas Lynch of Lynch Entertainment and was produced by RHI Entertainment, Hallmark Entertainment and Nickelodeon Productions. For home video releases, it was released under the Hallmark Entertainment label, and later by Mill Creek Entertainment, making it the first Nickelodeon show not to be released with Paramount Home Video.

Alex Mack is an ordinary teenage girl, living with her parents and older sister in the corporate town of Paradise Valley. After her first day of junior high school, while walking home, Alex is nearly hit by a truck from the chemical plant, and during the incident, she is drenched with a top-secret chemical called GC-161. It's not long after when Alex realizes the chemical has done something to her. She now has the power of telekinesis, can shoot electricity through her fingertips, and morph into a silver puddle. She also turns golden yellow when experiencing extreme emotions, a source of much anxiety. She confides only in her sister Annie and her best friend Raymond about her powers and must keep them a secret from everyone else, including her parents, for fear of what the chemical plant CEO, Danielle Atron, will do to her if she finds out.

GC-161 is a chemical compound of golden color that was being developed as a weight-loss miracle drug by chemical plant owner Danielle Atron. When taken in large doses, it has considerably dangerous side effects, including an ability to glow, telekinesis, electromagnetic manipulation, and the ability to metamorphose into a puddle of liquid. Many of Alex's problems seen throughout the series are a result of her powers, usually caused through malfunctions or lack of control.

Much of the series' plot hinges on Danielle Atron's desire to capture the GC-161 kid (Alex) and study its effects on "him" (she and many others assume it was a boy who got soaked in the chemical). More importantly, Danielle Atron fears that if the media learned the truth of GC-161 through this kid, she would lose the billions of dollars GC-161 would stand to make and her reputation would be ruined. Other test subjects, like a chimpanzee, several rabbits, and an unwitting test family, also developed lesser forms of Alex's abilities via small doses of GC-161.

Later in the series, Alex meets with one of the original researchers of GC-161, who reveals that the chemical was first developed in the late seventies, and that he knew of the danger it possessed (having tested it upon himself and gaining temporary powers). Though he tried to warn his superiors of the dangers of GC-161, Danielle Atron refused to listen, and so he fled to the woods to live as a hermit.

In the series finale, Louis accidentally learns of Alex's powers, but agrees to keep them a secret. However, when he blabs about them to Ray while on the phone, he is captured by Plant security and tortured into revealing Alex's identity. After having Alex and her parents imprisoned and with GC-161 ready to be sold within hours, Danielle Atron arranges to destroy her chemical plant with explosives, thus eliminating all evidence of her sinister activities. Fortunately, Alex's friends arrive to rescue the Macks, while Dave reveals the truth about GC-161 and Alex (having eventually learned her identity during Season 3) to the authorities, who see to it that Danielle is arrested in time.

Afterwards, Alex's father George develops a special antidote that can restore Alex's mutated state to normal. It is unknown what Alex chooses to do with the antidote afterward, for the last scene ends with an ambiguous shot of Alex smiling.

The show's only VHS release, In the Nick of Time, was released by Sony Wonder in January 1996, just months before Nickelodeon's home video license moved to Paramount Home Media Distribution.

The show's first season (consisting of 13 episodes on two discs) was released by Genius Entertainment (also known as Genius Products; a subsidiary of RHI Entertainment) on DVD on October 2, 2007. On June 6, 2017, it was announced that the complete series would be released on DVD by Mill Creek Entertainment on August 1, 2017, in Region 1.

A book series aimed at young readers was released along with the series. The first and last books of the series were novelizations of the first and last episodes, respectively. The rest of the series consisted of completely original stories, tied into the main series through the mentioning of various plot points from the TV episodes. 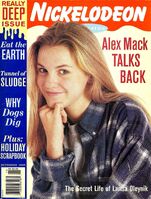 Alex Mack on the cover of Nickelodeon Magazine, November 1995