Nickelodeon
Register
Don't have an account?
Sign In
Advertisement
in: Shows, films, and people with wikis, Movies, Nicktoon films,
and 6 more

Teenage Mutant Ninja Turtles: Out of the Shadows
The SpongeBob Movie: Sponge on the Run

The SpongeBob Movie: Sponge Out of Water is the second animated film based on SpongeBob SquarePants created by Stephen Hillenburg. The film is directed by show writer and executive producer Paul Tibbitt, written by Jonathan Aibel and Glenn Berger, produced by Nickelodeon Movies and Paramount Animation, and was distributed by Paramount Pictures. It is the sequel to The SpongeBob SquarePants Movie, and stars the regular television cast of Tom Kenny, Bill Fagerbakke, Rodger Bumpass, Clancy Brown, Doug Lawrence, Jill Talley, Carolyn Lawrence, Mary Jo Catlett, and Lori Alan (all of whom are reprising their roles from the series and the previous film). Spanish actor Antonio Banderas was cast as the villain, Burger-Beard.

The film features live-action scenes directed by Mike Mitchell that were shot in Savannah, Georgia, and on Tybee Island. Filming began on October 9, 2013, in the downtown where various establishments were changed to resemble a "beach community" called Salty Shoals. Filming was completed on November 5, 2013. It was released in theaters on February 6, 2015 to positive reviews and was a box office success, grossing over $323 million worldwide against a $74 million budget.

A pirate named Burger-Beard and his band of seagulls travel to an island to obtain a magical book whose any written text comes true. The book tells the story of SpongeBob SquarePants, a childlike sea sponge who loves his job as a fry cook at the Krusty Krab fast food restaurant and faithfully guards the Krabby Patty secret formula from Sheldon J. Plankton, owner of the Chum Bucket and business rival to Eugene Krabs, SpongeBob's boss.

In the undersea town of Bikini Bottom, the Krusty Krab is attacked by Plankton. After a military battle with giant foods and condiments, Plankton feigns surrender: he uses a decoy of himself to offer the greedy Mr. Krabs a fake penny, which he hides inside to gain access to Krabs' vault. Plankton steals the formula, leaving a fake in its place. However, just as he is about to escape, SpongeBob catches him. They have a tug of war over the formula, but it magically vanishes before either can claim it.

Without the secret formula, SpongeBob cannot make more Krabby Patties, and the customers become ravenous. Only SpongeBob believes that Plankton is innocent of stealing the formula, and when all of Bikini Bottom turns on him, SpongeBob rescues Plankton with a giant soap bubble that he and Plankton fly away in. Bikini Bottom is soon reduced to chaos because of the absence of the cherished and much-relied-on Krabby Patty. SpongeBob proposes he and Plankton team up to get the formula back; he attempts to show Plankton the meaning of teamwork, but he doesn't quite understand. Eventually, the duo decides to go to the Chum Bucket and rescue Karen, Plankton's computer wife, to use as a power source for a time machine that will take them to the moment before the formula disappeared. They assemble the machine at an abandoned taco restaurant, but accidentally travel far into the future, where they meet Bubbles, a magical dolphin whose job it is to oversee the cosmos. They eventually succeed in retrieving the formula, but it turns out to be the fake Plankton had left.

Burger-Beard, who's removed the final page of the book and rewritten the story so that he gets the formula, converts his ship into a food truck to sell Krabby Patties at a beach community. The final page, which Burger-Beard discarded in the ocean, lands on the tree dome of Sandy Cheeks, SpongeBob's friend and a squirrel living underwater. Crazed by the lack of Krabby Patties, Sandy thinks the page is a sign from the burger gods, and suggests a sacrifice be made to appease them. The town attempts to sacrifice SpongeBob, but he smells Krabby Patties, and the crowd allows him to follow the scent, which leads to the surface. Bubbles returns because SpongeBob, who'd neglected to keep Saturn and Jupiter from colliding, cost him his job as overseer of the universe. However, he hated the job and is glad to be out of it, and thanks SpongeBob by allowing him and his friends (Mr. Krabs, Sandy, Squidward, and Patrick) the ability to breathe on land. Plankton joins also, stowed away in SpongeBob's sock. Bubbles shoots them out of his blowhole and they land on a beach.

The team locates Burger-Beard and, using the book, he banishes them to Pelican Island. Using Squidward's ink and the final page, SpongeBob rewrites the entire team as superheroes. They return and give chase to Burger-Beard, unable to apprehend him until Plankton, who'd been left on Pelican Island, becomes a muscle-bound hero and comes to assist them. He retrieves the formula and, having learned the values of teamwork, returns it to Mr. Krabs. With Krabby Patties back, Bikini Bottom returns to order, and Plankton resumes his role as business rival, bringing things back to the status quo.

In a final scene, Burger Beard along with his seagulls in the Bikini Atoll island, sings the SpongeBob SquarePants theme song, when suddenly Bubbles arrives and sings a rap battle against the seagulls, eventually allowing them to finish the song and end the movie.

On February 28, 2012, a sequel to The SpongeBob SquarePants Movie was first announced to be in development and was slated for an unspecified 2014 release.[1][2][3][4] During a Deutsche Bank media and telecom investor conference in Palm Beach, Florida, Philippe Dauman, the president and CEO of Viacom, the studio's parent company, initially stated:[1]

The reports also told that the second feature film of the series will be directed by the series' executive producer and showrunner, Paul Tibbitt, written by Kung Fu Panda writers, Jonathan Aibel and Glenn Berger, produced by Mary Parent, and executive produced by series creator Stephen Hillenburg.[5] The main voice cast of the previous film, Tom Kenny, Bill Fagerbakke, Rodger Bumpass, Clancy Brown, and Carolyn Lawrence, are set to return. The sequel will be a combination of traditional animation and live action as its predecessor was.[6][7] Following the release of the SpongeBob SquarePants 4D: The Great Jelly Rescue, a 3D short film, in early 2013 at the Nickelodeon Suites Resort Orlando, the executives also talk of perpetuating the 3D stereoscopy in the next SpongeBob feature film.[8]

The SpongeBob Movie: Sponge Out of Water has live action and animated scenes. The animation is in 2D at the beginning but when the characters enter the live-action world they are 3D CGI.

The Savannah Film Office announced on July 11, 2013 that the film will shoot its live action scenes in various Savannah areas in Georgia for September, October, and November for approximately 40 days.[9][10][11][12] City of Savannah Film Services director Jay Self said "[...]we are very excited to be working with Paramount [Pictures] on this project[...] We know from experience how valuable the investment and exposure generated by a project like this can be for our community."[9][13][14] The live action scenes are being directed by Mike Mitchell.[15] Filming began on September 30, 2013, until November 5, 2013[16] on sound stages in Savannah, locations in downtown, and on Tybee Island.[17][18][19]

The original score for the film is being composed by John Debney.[20]

In an interview in his Times Square office, Philippe Dauman stated "This will be a Nickelodeon-branded movie[...] We'll license the toys, but we own it." A video game titled "SpongeBob HeroPants" is based on the film and was worked on by Activision. The game was released on February 3, 2015. 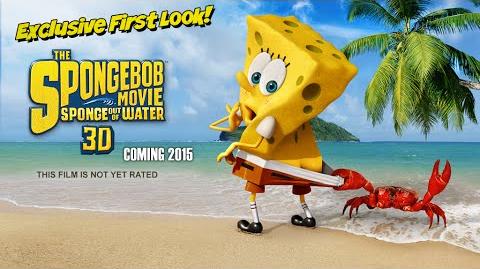 The SpongeBob Movie Sponge Out of Water - Trailer 1
Teaser trailer 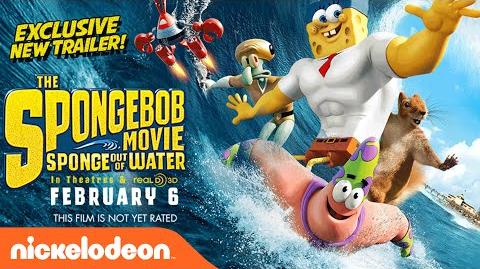 The SpongeBob Movie Sponge Out of Water - Trailer 2
Official trailer 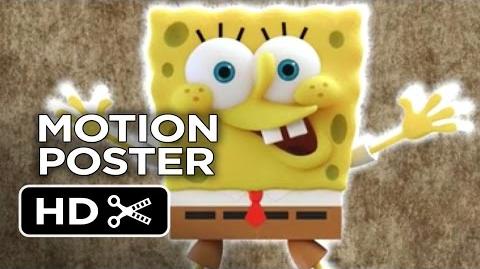 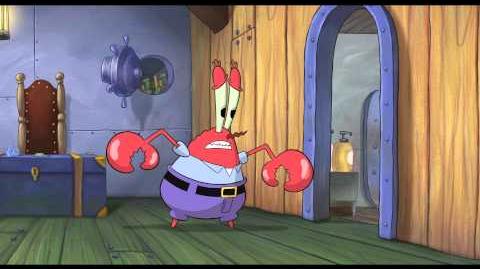 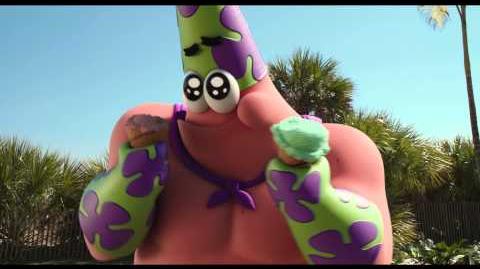 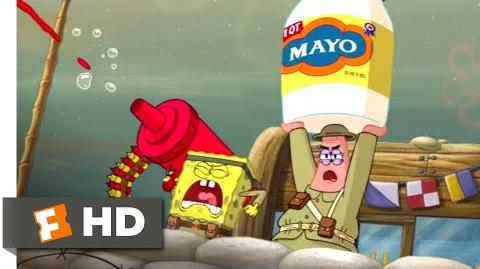 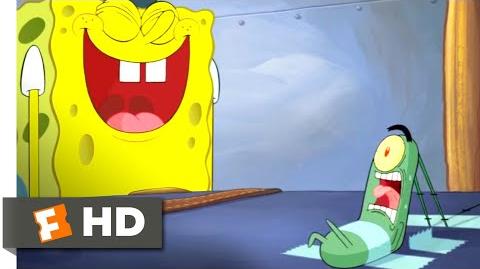 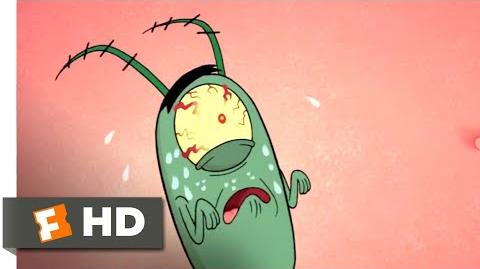 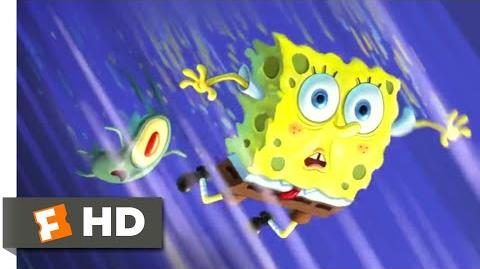 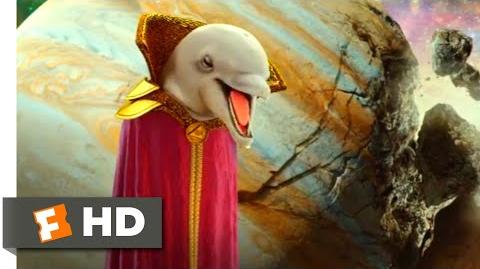 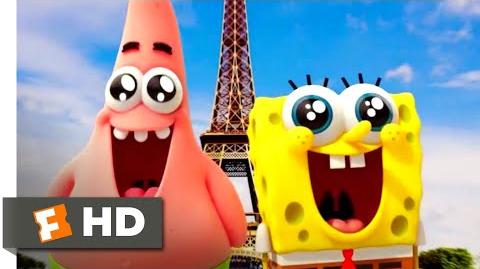 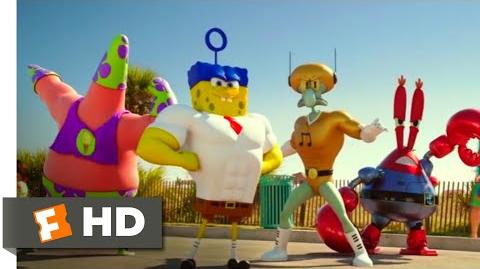 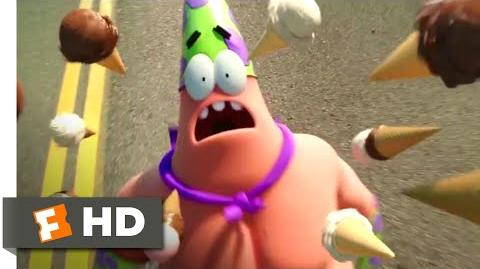 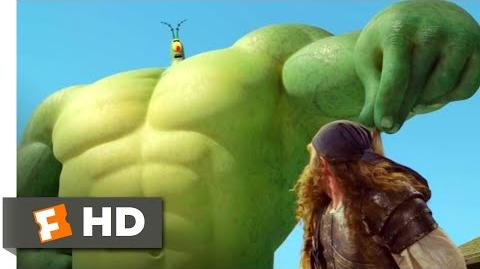 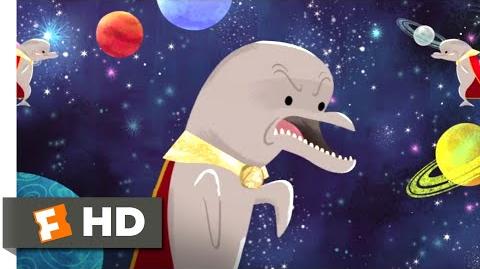 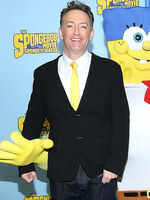 Early teaser poster from before the title was finalized. 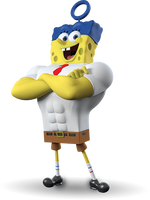 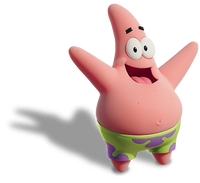 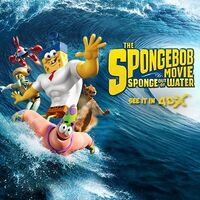 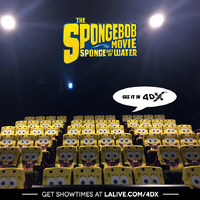 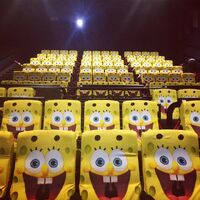 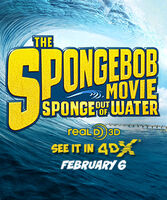