Nickelodeon
Register
Don't have an account?
Sign In
Advertisement
in: Shows, films, and people with wikis, War causing pages, Nicktoon films,
and 7 more

The SpongeBob Movie: Sponge Out of Water
Playing with Fire

The SpongeBob Movie: Sponge on the Run[3] (originally titled The SpongeBob Movie: It's a Wonderful Sponge) is the third feature film based on SpongeBob SquarePants. It was first released theatrically exclusively in Canada on August 14, 2020 and on Netflix for international markets[4] on November 5, 2020, and later on premium video-on-demand and Paramount+ for the United States on March 4, 2021, with a DVD and Blu-ray release following on July 13th.

The movie opens at SpongeBob's house where we find Gary waking his owner up. After feeding his pet, we see an unrealistic montage showing SpongeBob and Gary's daily routine, after which SpongeBob rushes to the Krusty Krab in order to be early, leaving Gary sad and alone.

At the Chum Bucket, we see Plankton plotting yet another evil plan to get the Krabby Patty secret formula, until Karen reminds him of his "wall of failures". Karen tries to tell her husband that SpongeBob is the factor of all his failures, but Plankton ignores her and continues his plan.

Meanwhile, at the Krusty Krab, SpongeBob is busy cooking and serving Krabby Patties, when Sandy arrives with a special invention - a robot named Otto. She shows the robot to Mr. Krabs, who thinks that it's a great invention to fire people without remorse. After some humorous antics, though, Mr. Krabs throws Otto into Plankton's garbage can, and Karen decides to adopt Otto.

That night, SpongeBob is ready to go home after cleaning up the Krusty Krab when we see that Plankton, disguised as a pickle, has been hiding in a pickle jar. He uses a giant mechanical claw to remove a food cover from a Krabby Patty, but as he's about to accomplish this, SpongeBob enters the kitchen looking for keys, causing Plankton to fall into a series of comical mishaps, after which he realizes that SpongeBob truly is the factor for all his failures.

Meanwhile, in the Lost City of Atlantic City, we meet Poseidon, who discovers a wrinkle right next to his eye. He demands his Chancellor to bring him a snail so he can uses the snail's trail as a face cream. However, the Chancellor informs him that they're out of snails and writes a royal decree that is posted all over town. When Plankton reads one, he gets the brilliant idea of kidnapping Gary and sending SpongeBob on a risky mission to get Gary from the Lost City of Atlantic City, thereby getting rid of SpongeBob forever.

The next day, when SpongeBob arrives home, he can't seem to find Gary anywhere. After a flashback to when he first met Gary at Camp Coral, Patrick then tells SpongeBob that he found one of his "Lost Snail" posters, giving him the idea to look for clues. They soon find the royal decree mentioned earlier, and SpongeBob assumes that Gary's been snailnapped and taken to the Lost City of Atlantic City. After a comedic pep talk, SpongeBob and Patrick are ready to go rescue Gary, but they need some wheels. Plankton, as part of his plan, provides them a free ride to the Lost City of Atlantic City, with Otto as the driver. Meanwhile, Mr. Krabs and Squidward find out SpongeBob is missing and can't cook for the customers, leading to them acting like savages.

While that is going on, SpongeBob and Patrick seem to be in a dream where they find a bar called "The Inferno Saloon" in the middle of nowhere, when suddenly a taking tumbleweed called Sage gives the duo a so-called "Challenge Coin" that's supposed to give SpongeBob the courage needed on his journey. The two are assigned to free the souls from "The Inferno Saloon" and its evil owner, "El Diablo". They manage to do so, despite "El Diablo"'s attempts to kill them. Soon after, they both wake up from the dream, but somehow Sage is still with them, telling them to look at the Window of Meanwhile, a magical device which allows them to watch what's happening in the kingdom, where they find Poseidon using Gary as a face cream. Horrified by this, SpongeBob and Patrick hurry to Atlantic City.

Back at the now-empty Krusty Krab, Mr. Krabs is devastated for losing his customers, when suddenly Plankton enters and demands Mr. Krabs to give him the secret formula once it for all, Mr. Krabs, without hesitation, takes out a tiny secret formula from his belt and hands it to Plankton, who at first happily receives it, but then feels empty and upset at seeing Mr. Krabs so depressed.

SpongeBob and Patrick finally arrive at Atlantic City, where Sage advises them to not lose any focus. But they quickly do lose focus and get caught up in riding roller coasters, eating food, and gambling, it all leads to them waking up drunk and confused. When they finally regain consciousness, they hurry to the kingdom's stage entrance where they find themselves forced to participate in the talent show. SpongeBob finds Gary and tries to get him home, but Poseidon has him arrested.

Meanwhile, Sandy, having found out that SpongeBob is missing, she goes to the Krusty Krab and starts blaming Mr. Krabs and Squidward on SpongeBob's disappearance. When they explain that they weren't guilty, a news report explaining SpongeBob and Patrick's arrest plays on the Krusty Krab television. Seeing this, Mr. Krabs, Squidward, Sandy and even Plankton (who has apparently forgotten about finally getting the Krabby Patty formula) embark on another dangerous journey to free SpongeBob and Patrick.

In Poseidon's dungeon, SpongeBob finds out he lost his "Challenge Coin" by gambling it, the duo get on a fight and are then sent to their frightening execution, only to be sabotaged by Mr. Krabs, Squidward, Sandy and Plankton, they then start explaining why SpongeBob shouldn't get executed by traveling back to Camp Coral in the form of flashbacks.

After these flashbacks, Mr. Krabs gives out a speech about how SpongeBob inspired him to open the Krusty Krab and how SpongeBob is in fact the secret formula to the Krabby Patty. After that, the crew perform "Secret to the Formula", which is a distraction for SpongeBob to get his hands on Gary and switch him out with a wooden decoy. When Poseidon discovers this, he sends his guards to get them.

After an exciting chase scene, the gang hide in a knight armor, leading to an intense climax with the guards fighting the armor being controlled by SpongeBob, Patrick, Squidward, Mr. Krabs, Sandy and Plankton. They all get rounded up by Poseidon, who will only let them go if they hand over Gary. Sage then reappears and reminds SpongeBob that the courage he needs to confront Poseidon is inside him, so he defies Poseidon and tells him that he loves Gary too much to hand him over, then tells Poseidon he doesn't have any loyal friends himself. Poseidon laughs at this at first, but after actually checking with everyone on his kingdom, he comes to the sad conclusion that SpongeBob is right. SpongeBob tells him that he'll gladly be his friend if he sets Gary free. Poseidon explains that then he wouldn't be able to get rid of his wrinkle, but SpongeBob explains that looks don't matter, what matters is what's inside, so after this advice, Poseidon starts "loosening up a bit" by taking off his wig, removing his neck clip and dentures and taking off his chest plate and girdle. When he realizes how free he feels like that, he salutes SpongeBob for having the courage to stand up against a powerful king, and frees Gary and all the snails he previously kidnapped, so SpongeBob has the idea to turn Bikini Bottom into a sea snail refuge. 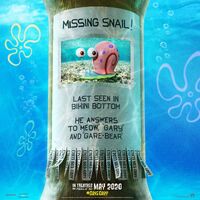 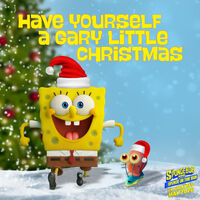 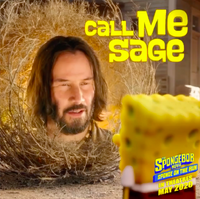