Nickelodeon
Register
Don't have an account?
Sign In
Advertisement
in: Shows, films, and people with wikis, Shows, Acquired shows,
and 2 more

The topic of this page has a wiki of its own: Thomas the Tank Engine Wikia.

Thomas & Friends (previously known as Thomas the Tank Engine & Friends) is a children's television series distributed by Mattel Television. It is based on the Railway Series by the Reverend W. Awdry and was created by Britt Allcroft.

In the United States, Nickelodeon and the Nick Jr. Channel aired Thomas & Friends from late 2017 to 2019. In early 2020, Mattel announced that the show would move to Netflix,[1] officially ending its short run on Nickelodeon.

Thomas & Friends is a television series mainly based around railway engines that live on the Island of Sodor. The show is mainly about the title character, Thomas, a cheeky little blue tank engine with six small wheels, a short stumpy funnel, a short stumpy boiler, and a short stumpy dome. Thomas & Friends takes place on the standard gauge North Western Railway, the narrow gauge Skarloey Railway, and the 15-inch gauge Arlesdale Railway. The head of the North Western Railway is Sir Topham Hatt, affectionately nicknamed "The Fat Controller" by the engines and staff, the Skarloey Railway is operated by Mr. Percival, "The Thin Controller," and the Arlesdale Railway is operated by Fergus Duncan, "The Small Controller."

In January 2018, after the contract to air the series on Thomas' previous US broacaster PBS expired, it was announced by Mattel (the owners of the Thomas & Friends brand) that Nickelodeon would be the new US broadcast home for Thomas & Friends starting from March 2018. From March 12, 2018 until December 30, 2019, Nickelodeon and the Nick Jr. Channel aired episodes and specials of the series' 19th-23rd seasons (Seasons 21, 22, and 23 of which were premiered on Nick's networks in the US).

In January 2020, Mattel announced that Thomas & Friends episodes and specials would no longer be available on Nickelodeon or Nick Jr. in the US, and not long afterwards, the series was moved to Netflix in March 2020. In 2021, it was announced that Thomas would move channels once again, with Thomas & Friends: All Engines Go! airing on Cartoon Network's "Cartoonito" block.[2] 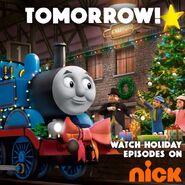 A promotional image from 2017 announcing holiday-themed episodes airing on Nick.

The Nick Jr. Curriculum Board used on Nickelodeon and Nick Jr. Channel broadcasts of Thomas & Friends in the US from May 21, 2018 until December 30, 2019.