Nickelodeon
Register
Don't have an account?
Sign In
Advertisement
in: Character stubs, Dora the Explorer characters, Animals,
and 9 more

Squirrel
Tico is a Dora the Explorer character. He's a four-year-old Spanish-speaking squirrel and a loyal good friend to Dora Márquez and Boots. While Tico is young and playful, he can always also be brave and heroic. Since Tico can always operate any vehicle - everything from a bicycle-powered plane to a Super Spy Boat-Car - he has been known to save the day in a crisis. He is often found driving in his little yellow car or in his tree at the Nutty Forest. Tico has purple fur, white eyes with black pupils, a pink nose and a bushy tail. He wears a colorful striped vest consisting of the colors orange, magenta, dark violet, lime and blue. 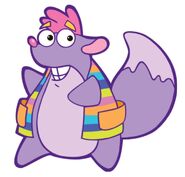