Nickelodeon
Register
Don't have an account?
Sign In
Advertisement
in: Rugrats characters, All Grown Up! characters, Males,
and 17 more

Tommy Pickles
Rugrats and All Grown Up! character

Thomas "Tommy" Pickles is the main protagonist of Rugrats and All Grown Up! He is a courageous young boy who is often going on all sorts of imaginary adventures, usually accompanied by his friends, Chuckie, Kimi, the twins Phil, and Lil. He is always willing to stick up for his friends against bullies like his cousin, Angelica. In All Grown Up! (which takes place approximately ten years after the events of the original series), it is shown that he later starts pursuing a career in film making. Series co-creator Arlene Klasky said that she based the character of Tommy on her own son.

Tommy was born prematurely and was placed in an incubator. Tommy, the unanimous leader of the Rugrats, is intelligent, courageous, curious, compassionate, and articulate. He also happens to be a year old, which gives him an endlessly interesting perspective on life. Stu and Didi Pickles do their best to coddle their oldest child, but, as Tommy frequently says, "A baby's gotta do what a baby's gotta do." Under the not-so-watchful eyes of the grown-ups, he leads his Rugrat friends on expeditions to unravel the great mysteries of life -- like "Where does the light go when the refrigerator door is closed?" To Tommy Pickles, the world doesn't always make sense, but it makes an incredible amusement park. He was never shown with teeth until All Grown Up!

He loves to explore and can be very creative especially when he plans games for his friends. It is revealed during the series' run that Tommy's brave personality developed due to his being a premature baby: he was very scared in the hospital until his mom came and held his hand. As leader of the Rugrats, he often gets them into trouble; despite this, he's always ready for an adventure. Tommy's hero is Reptar, a movie monster designed as a parody of Godzilla, who he has complete and utter faith in. His "bestest friend" is Chuckie.

Tommy's distinct features in Rugrats are a bald head with a few strands of hair and stubble, a soft, light voice, a sky blue shirt, a diaper, bow-legs and pigeon-toed bare feet, and he can hum softly. He was the youngest character (although not much younger than Phil and Lil) until his younger brother Dil was born; despite that, he had a reputation for being the "bravliest" baby and would take the others along on adventures to wherever his imagination took him. These adventures of his usually involved stopping some sort of evil plot. He also stood up to his evil-minded cousin Angelica. He appeared in most episodes of any character. He does not appear in "Cuffed", "The Unfair Pair", "Pickles vs. Pickles", and "Tell-Tale Cell Phone".

We learn throughout the series, especially in Rugrats Go Wild, that Tommy wants to be an explorer when he's "growed-up". However in All Grown Up, he found a new dream - to direct films.

In Rugrats, Tommy tends to look in his diaper for things that help him and his friends out of tough situations. Usually upon reciting his catch-phrase "A baby's gotta do what a baby's gotta do," his diaper straps will come undone and his diaper will slip down, this can lead to his embarrassment as he is seen pulling it back up while holding it and blushing.

Even in the movies his diaper falls down frequently and shows his backside. In the first movie, as he defends Dil from Phil and Lil, his little brother grabs his diaper strap and yanks it, which causes his diaper to fall completely, showing Tommy's backside to the camera and frontside to his friends who look on in awe. As he looks down and sees his diaper has fallen, he quickly pulls it up very embarrassed.

However, it's not only embarrassment that his diaper brings to the table. He's often seen using it to house odds and ends. It can be just as helpful for him and his friends as it can provide comic humiliation. His most trusted tool is his screwdriver, which he calls his "Studriver" and is kept in his diaper. This is his go to tool for helping him and his pals get out of cribs, gates, and various other scenarios. Tommy is often seen checking his diaper like a pocket looking to see if his needs are met by something deep inside.

In All Grown Up! 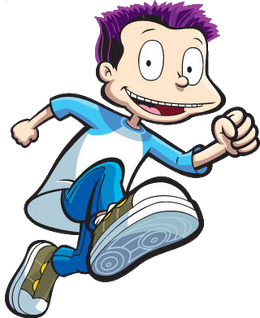 In the spinoff series All Grown Up!, Tommy has purple hair like his father. Also, similar to Susie's talent for singing, Tommy also has a newfound talent: making films with his camcorder. A few episodes have been made around this fact: "Truth or Consequences", which also revealed he made his first film at the age of 37 months, had him making a negative film about his friends; the main storyline of "Brother, Can You Spare The Time?" opened with him mentioning recently winning a young filmmaker's award; and one storyline in "Bad Aptitude" was about Tommy's sudden early retirement from filmmaking after making a flop and receiving an unfavorable (for his filmmaking aspirations) result on his career aptitude exam. However, he has not been seen with his camcorder since "The Big Score", when he was filming Lil at the soccer field.

As he's grown up, he's not as perfect as he used to be on Rugrats. In "Thief Encounter", he was discovered to be stealing goods from around the neighborhood, but that was because he was sleep walking. In "River Rats", he was shown to be afraid of water, stemming from an experience during a fishing outing with his grandpa. And in "Dude, Where's My Horse?", he was the worst cowboy out of the regulars.

Up until early Season 2, Tommy was also either shown or mentioned as being part of the school soccer team, even trying to teach Dil how to play (as seen in "Fools Rush In"). Lately (more specifically since "The Big Score"), however, all the focus on soccer has involved only Phil and Lil DeVille. It is also implied that he may have feelings for his friend Kimi Finster.

Tommy Pickles as a Adult

Tommy Pickles in the revival of Rugrats

Tommy as he appears in the first season of All Grown Up!

Tommy and Chuckie in the first season of All Grown Up!

Tommy and Kimi in the second season of All Grown Up! 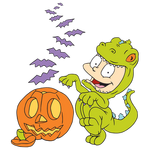 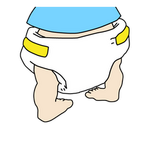 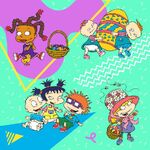 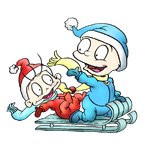 Tommy with Chuckie and Spike in a picture promoting The Haunted Hathaways. 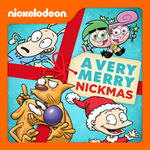 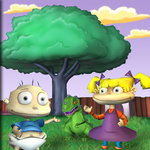