Nickelodeon
Register
Don't have an account?
Sign In
Advertisement
in: The Fairly OddParents characters, Females, Kids,
and 12 more
English

Timmy Turner (crush); Cosmo and Wanda (with full knowledge as of the movie, however was briefly their godchild in "Birthday Wish!"); Poof; Dingle Dave and Christmas Carol

Timmy avoiding and rejecting her, Trixie, Timmy being bullied

"Not bad, Turner. You saved my tree and stole my heart."

Tootie is Vicky's kind-hearted little sister on The Fairly OddParents, and as such, she is also Vicky's most frequently tormented victim, but she ironically does not have fairy godparents of her own. Tootie has an obsessive crush on Timmy Turner, who at first does not seem to like her very much; however, it is shown in the series' live-action movies that Timmy eventually realizes that he loves Tootie as well.

She maintains an unrequited love for Timmy Turner. It is so huge a crush that she has a "Timmy Love Shrine" up in her bedroom, and she always carries something in the likeness of Timmy wherever she goes. Timmy, very shallow and almost never willing to look at the relationship from Tootie's point of view, does not return her affections due in part to her thick glasses and strange attire (and the fact that her big sister is Vicky). Out of Timmy's various love interests, Tootie is the most sympathetic due to the fact that she is the only one of them who truly loves him. She is also a likely candidate of being the mother of Timmy's kids shown at the end of Channel Chasers. This can be confirmed in canon by A Fairly Odd Movie: Grow Up, Timmy Turner!, though the relationship would really not become romantic until age 23.

Timmy does sometimes feels guilty about the way he shuns and avoids Tootie, however; for example, in "Birthday Wish", he feel so guilty about using the invitation for her birthday to go to a kid's restaurant with his friends while not coming to her birthday that he lends her his fairy godparents, Cosmo and Wanda, for the remainder of her birthday, leading to an averted worldwide reveal. He also saves her from Francis, the school bully in "Kung Timmy", when she was the only person who believed in him. He also shows that he even cares about her a little when he rejects the advances of the popular and snobbish Trixie Tang in "Love Struck!" in order to ask her to be his valentine after seeing how sad she is. He also attends her ballet recital in "Oh, Brother!"

Tootie was first seen in the Oh Yeah! Cartoons short, "The Fairy Flu!", when she invited Timmy to her birthday party. Out of all the Fairly OddParents characters who first appeared on Oh Yeah!, Tootie had the most change in physical appearance. In "The Fairy Flu!", Tootie was depicted with smaller pigtails, pink glasses, a light blue shirt, and pink pants. Additionally, her voice was different as well - in the original short, she was voiced by Amber Hood. In the regular series, Tootie is, like Vicky, voiced by Grey DeLisle.

In Channel Chasers, she went undercover as Deep Toot to warn Timmy's parents of Vicky's evilness, although they subsequently forgot all memory of this following Timmy's wish. She has also been known as Princess Tootie, and several mean names by Vicky.

Oddly, in comic stories featured in Nickelodeon Magazine's quarterly specials, Vicky is willing to stick up for Tootie. In the story "Pack of Lies", in which Timmy lies to Tootie in order to get out of a festival she claims to be hosting, Vicky is willing to exact revenge on him simply because he has lied to Tootie.

Despite her genuine devotion to Timmy, Tootie was inexplicably absent from the three-part special "Wishology", and thus she was unable to object to Timmy and Trixie's hook-up.

In the live-action telefilm, A Fairly Odd Movie: Grow Up, Timmy Turner! that Tootie grows up to become a very beautiful and smart young woman who loves nature and opposes Hugh J. Magnate, Jr.'s attempts to tear down the Dimmsdale Dogwood, a tree she used to climb as a kid, and turn the surrounding park into an Oil Well/Hotel. After reuniting with the now 23-year-old Timmy, she is shown to still be interested in him, but Timmy avoids her advances so he can keep his fairies, as falling in love with her would cause him to officially "grow up" and he would lose them. Tootie takes Timmy on a date, but after a while, she becomes tired on his emotional immaturity and suspects that he is hiding something or someone from her. After a short fight with Timmy, Tootie storms off but is captured by Magnate. In Magnate's lair, she finally meets Cosmo, Wanda and Poof, whom Magnate has also taken captive, and realizes what Timmy was hiding from her all along. Timmy rescues her, and in order to save his fairies' lives, he confesses his love for Tootie and shares a long and passionate kiss with her, causing his fairies to disappear as he has officially grown up. At the end of the film, Timmy and Tootie, now a couple, are allowed by Jorgen Von Strangle to keep Cosmo, Wanda and Poof, so long as they use their wishes to help others. Together, Timmy and Tootie set up a business called "Wishful Thinking", and use the fairies' powers for helping people all around the world. 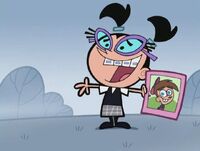 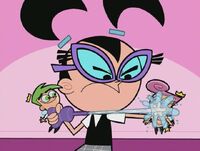 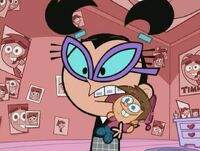 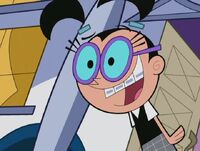 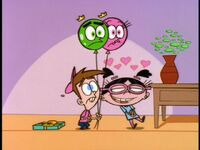 Tootie (in her original design) with Timmy in "The Fairy Flu!" 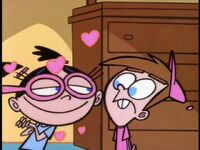 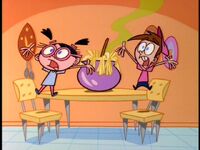 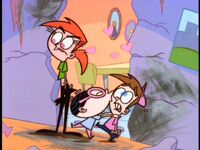 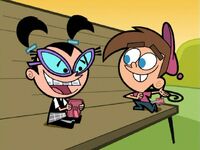 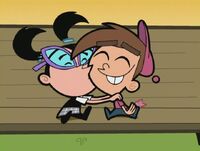 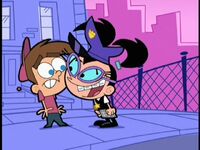 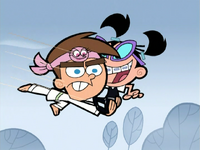 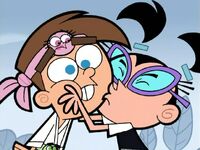 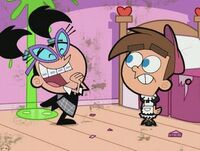 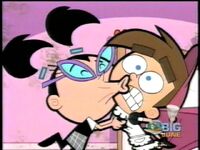 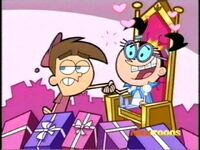 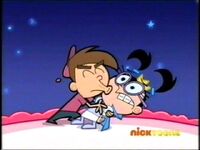 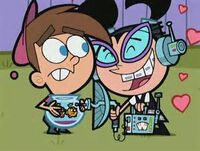 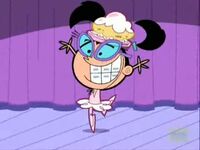 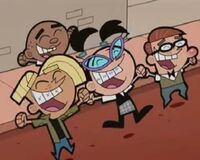 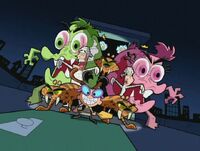 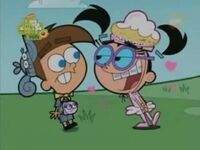 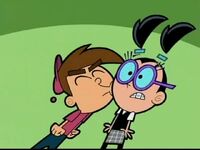 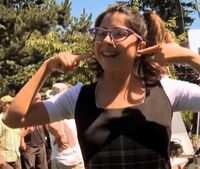 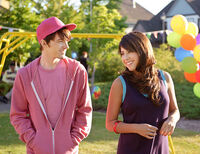 Timmy and Tootie kissing after he confesses his love for her.

Tootie with Timmy, Cosmo, Wanda and Poof at the end of A Fairly Odd Movie.