Victoria "Tori" Vega is the main protagonist of Victorious. She experiences the biggest change of her life during the Big Showcase when she transfers from Sherwood High School to Hollywood Arts. This enables her to learn more about her "craft" (acting, singing, and dancing) and make new friends and frenemies. Though she is still sometimes out of her element, she is quickly learning how things work at Hollywood Arts.

Tori was portrayed by Victoria Justice.

Tori is nice, positive, kind, short-tempered, easy-going, funny, sweet, intelligent, serious, forgiving, more mature and responsible than her sister, and can be shown to be neurotic and impatient, and sometimes stress out a lot. Nevertheless, she is always there when her friends need her, such as in "Rex Dies" when she pretends that Rex came back to life to make Robbie happy and in "Jade Dumps Beck", where she helps Jade and Beck get back together. Although sometimes it seems like they don't care (especially Jade), they really do love her and usually return the favor, such as when Beck did her stunt for her in Beck Falls for Tori" and when they all help her to win a private concert from Ke$ha so she won't have to be Trina's assistant in "Ice Cream for Ke$ha".

In the beginning of the series, she was insecure of herself, as shown in the pilot when she was good enough to get into Hollywood Arts on scholarship and yet still unsure of her acting ability in "The Bird Scene". However, as time progresses she is shown to become more confident in her abilities. Tori is shown to have an evil side. In "Freak the Freak Out", she chases her sister Trina and tries to hit her with her dad's new camera. In the same episode, Mr. Vega tells Trina that she has to get her wisdom teeth removed, and Tori cheers and makes fun of Trina. She gets her just desserts when she has to spend the weekend taking care of Trina, while her parents are on vacation. Throughout the series, she is shown being hostile to Trina on multiple occasions. When she throws the first ever Hollywood Arts prom, Jade gets mad because she can't throw a play that she booked months in advanced. When Jade tries to get revenge on Tori, Tori foils her plans, and gets what she wants, while Jade gets nothing. Tori didn't offer Jade anything in return. Other than that, she is very nice. 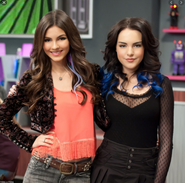