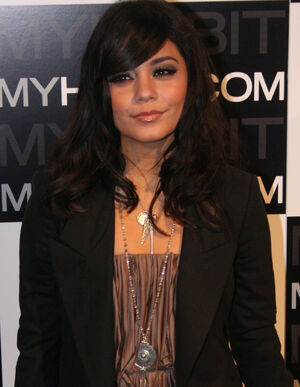 Vanessa Anne Hudgens (born December 14, 1988) is an American actress and singer, who is best known for her portrayal of the character Gabriella Montez in the High School Musical series. She also earned critical acclaim for her role in the 2009 film Bandslam.

Her first work on Nickelodeon was in 2003, she appeared as Lindsay in the "New Tunes" episode of The Brothers Garcia. After her HSM success, she appeared in the Drake & Josh episode "Little Sibling" as Becca, Drake Parker's girlfriend and in "Alien Invasion" as Penny.

She won Favorite Movie Actress at the 2009 Kids' Choice Awards for her role as Montez in High School Musical 3: Senior Year.

Retrieved from "https://nickelodeon.fandom.com/wiki/Vanessa_Hudgens?oldid=142751"
Community content is available under CC-BY-SA unless otherwise noted.