Nickelodeon
Register
Don't have an account?
Sign In
Advertisement
in: The Fairly OddParents characters, Characters voiced by Grey DeLisle, Females,
and 10 more

"Don't call me that! Call me TRIXIE! I'M TRIXIE!!!"
"Do I think Timmy Turner is neat? Actually, my love for him burns with the white-hot intensity with of a thousand suns, but I can't let Trixie know that. [types] 'No way, he's gross.'"
Veronica is Trixie's best friend on The Fairly OddParents. She is part of the popular kids, the richest kids at Dimmsdale Elementary School. She is quite envious of Trixie and strives to be as popular at school as her, and also harbors a secret crush on Timmy. Striving to achieve her close friend, Trixie's level of popularity at school, she suffers from an inferiority complex causing her to envy Trixie's beauty and popularity.

Veronica is portrayed as being malicious, paranoid, and generally anxious. Striving to achieve her close friend, Trixie's level of popularity at school, she suffers from an inferiority complex causing her to envy Trixie Tang's beauty and popularity. In most episodes where she is present she will often be the subject of emotional or physical discomfort or trauma. Though technically a "Popular Kid," Trixie, Timmy, and most of the characters treat her as inferior and generally without respect or sympathy. She is also secretly in love with Timmy, as seen in the episode "Mind Over Magic" when Timmy was reading her mind and in the half-hour special "Information Stupor Highway" when she states that her love for Timmy "burns with the white hot intensity of a thousand suns," which was the same quote Timmy used to describe his affection for Trixie earlier in the episode. In "The Boy Who Would Be Queen", she felt physical pain when Trixie ripped a picture of her in half.

Veronica is blonde-haired with her hair held back in a ponytail. She usually wears a cheerleader outfit with a pink skirt, pink boots, and white shirt with a "D" (for Dimmsdale) on the front. It is interesting to note that no other students are seen wearing cheer-leading outfits at Dimmsdale Elementary School, although a few cheerleaders were seen at Dimmsdale High School with identical outfits, so Veronica may be a part of a junior cheer leading squad. She once wore an identical outfit made entirely out of tissue paper, sugar and powdered milk, and when she was pushed in a fountain it was revealed that she wears light purple short sleeve shirt with a picture of a heart and dark purple frilly panties, much to her humiliation, as she was right in front of Timmy. (The episode was "Class Clown.", if you're interested.) She is taller than the other students in her class, and is around the same height as Trixie.

Veronica is always seen mingling with the other popular kids. She usually speaks like a valley girl, and when in public she holds nothing but contempt for Timmy and his friends. However, it has been shown several times that she may actually have a crush on Timmy. She highly envies Trixie for her appearance and social standing, to the point where she literally wants to be Trixie (she has many Trixie-related items in her room as shown in "Information Stupor Highway"), even going as far as demanding her parents call her by that name and wears a wig around her house to resemble Trixie's hair.

Veronica is described as "popular, yet less popular than Trixie Tang". In many cases, she is treated poorly by the other popular kids, and none of the unpopular kids seem to like her either, usually because she does not call them by name but rather addresses them as losers or "not populars". It's not known how she feels about Timmy's crush on Trixie Tang. Other than that Veronica wants to be Trixie Tang so that Timmy will love her instead, but Timmy considers her crazy for this very reason. It's not known how she feels, or if she even cares about Tootie's own unrequited crush on Timmy, since neither character has ever appeared together.

Not much is known about Veronica or her family, other than that she has a mother who has never been seen on screen. The inside of her room has been seen and it looks very lavishly decorated, but her actual house has not been shown and its not known if she lives in a big mansion like Trixie, or a normal house like Timmy. If Veronica lives in a normal house, then this could mean that she's just middle class, and it would explain Trixie, Tad and Chad's contempt for her, along with her lack of popularity. However, they would have kicked her out by now, and she had on a Jack-O-Bot. So this means she is richer than Timmy, but not as rich as the other Popular Kids. Although her parents have never been seen, her mother was heard off-screen once in the episode "Information Stupor Highway", but otherwise it is not known what her family looks like, or if she has any siblings. 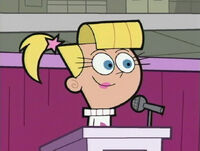 Veronica with Trixie, Tad, and Chad. 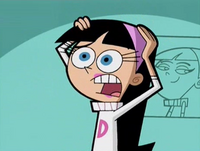 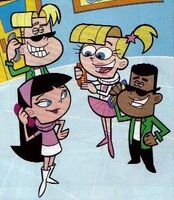 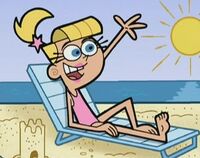 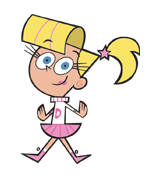 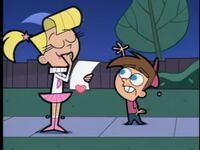 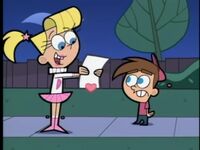 I got your letter, Timmy. 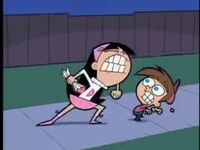 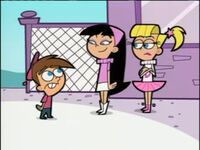 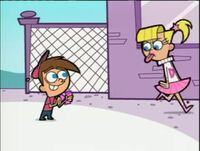 Veronica secretly has a love crush on Timmy.