Nickelodeon
Register
Don't have an account?
Sign In
Advertisement
in: The Fairly OddParents characters, Females, Teenagers,
and 9 more

Doidle the dog; Chipper the cat; Happy the goldfish; Ginny the parrot; Spunky the hamster.

"I just wish in my heart that that someday I'll be able to make the whole world miserable!"

Victoria "Vicky" is one of the two main antagonists (alongside Denzel Crocker) of The Fairly OddParents. She is an evil red-haired teenager who happens to be Timmy Turner's babysitter, and as such, she uses all opportunities to make his life and all other children's lives (including her little sister Tootie) miserable. She is typically hired when Timmy's parents make a hasty getaway trip to one of their "adults only" destinations, leaving Timmy in her cruel hands. It was partly because of the abuse she heaps on Timmy that he ended up receiving Cosmo and Wanda as his fairy godparents.

Vicky is a very two-faced person, when it comes to adults (namely parents) she is a seemingly sweet girl who has a continuous liking for cash, but once all parents are gone, her true colors are revealed. She tortures Timmy so quickly that it takes one second to wreck the place and knowing that Timmy's parents are nitwits, it's easy to fool them. Timmy has always wanted payback and has always wanted to get rid of her, but whenever this dream comes true, Timmy must always revert it as something will always appear or chime in to make Timmy realize he actually needs her (such as his parents hiring a worse babysitter). The parents of children and other rich people pay her wads of cash through her babysitting. She has been transformed more times than any other human except for Timmy.

In the original Oh Yeah! Cartoons shorts, after her constant torture left Timmy so miserable that he managed to gain fairies, she officially became Timmy's main target. On Timmy's first day with fairies, he pulled so many magic-induced pranks that once he had to stop, Vicky was far too suspicious. She was shown to believe that something was going on, somewhat like Mr. Crocker. In the main series, she's completely oblivious to the fact that Timmy has fairies despite usually being on the receiving end of their magic, even whenever she steals a magical object from Timmy and activates it, as she believes them to simply be expensive fancy things from off the internet. Although there are oftentimes when Timmy tries to get rid of Vicky as his babysitter, he still deep down cares for her. He knows that if Vicky is ever fired, then he will no longer be miserable and he would lose Cosmo and Wanda, so he often tries to keep her as his babysitter to keep Cosmo and Wanda for as long as possible.

Ironically, despite continuing to appear in the show's intro sequence for its entire run, Vicky's appearances became less frequent as the series went on, especially from the sixth season onward. Her reduced role on the show even applied to the live-action movies, in which she has little screentime in the first two films (in fact, most reruns of the first movie cut her scenes altogether) and rarely interacts with Timmy or Tootie.

Vicky has red hair with a ponytail, pink eyes, pink lipstick, and she usually wears a short green midriff T-shirt that shows her stomach, and black pants and shoes. She often puts on a softer, sweeter tone in the presence of Timmy's parents and other adults. However, whenever she's alone with one of the kids she babysits, she will scream and holler at them. The only adults Vicky is not sweet towards are her own parents (who have an extreme fear of her) and those she has absolutely no chance of benefiting from. At age fourteen, Vicky wore a green bow in her hair and a green flower on her shirt. At eighteen, she has a more shapely body and wears gold earrings. When she was aged down to age five in "The Switch Glitch", she wore similar colored clothes, but with a large purple bow in her hair, and has a voice similar to her sister Tootie, albeit slightly lower.

Vicky is one of the most horrible and corrupt characters in the series; she cheats at everything she does (revealed in "A Bad Case of Diary-Uh!" and a variety of other episodes), lies to parents, loves torturing children (including Timmy and her own sister Tootie), is extremely greedy, mean, selfish, and shows absolutely no remorse for her actions. Vicky is not considered to be emotional, but she has shown some occasional positive feelings and has even been nice to Timmy based on her own will:

Her interests are mostly centered around typical teenage girl interest, such as fashion magazines, soap operas, and cute boys, and in earlier cases, she would rather simply read a magazine and ignore Timmy rather than torture him. Other times, however, she is more malicious and keeps a collection of medieval weapons that she doesn't hesitate to try to use on those she babysits.

Vicky's most popular word would be 'twerp' which she calls Timmy a lot throughout the show. Her goals in life are to become rich, marry someone beautiful, and possibly even world domination. Vicky is not above theft either, one time she sold a person's car off the street simply because she was offered money for it, and then attempted to steal this car again later to sell to a higher bidder. She also attempted to bribe and blackmail all the judges into winning the Miss Dimmsdale pageant. In almost all instances of wrongdoing however, Vicky's been usually foiled by Timmy and his fairies.

Because of her laziness and apathetic behavior, Vicky often overlooks things. She forces Timmy to do her school work for her time to time (despite that Timmy often flunks his own grade and it's hard to see how he would be able to handle high school work, not to mention the fact that Timmy is six years younger than her and likely has no grasp of high school education yet). She will frequently get hamstrung somehow by Cosmo and Wanda's magic and will either freak out or simply not suspect a thing. This is usually because Cosmo and Wanda wipe her memories of these events, or else she simply suspects Timmy and plots revenge on him. None of her plans to get back at Timmy are ever that thought out, such as when she tarred and feathered Timmy only to get stuck in the tar she sprayed in the path of a steamroller. Despite her own intellectual shortcomings, she is still able to outwit Timmy's parents and manipulate them better than he can, which makes her one of Timmy's greatest foes.

As revealed in "Abra-Catastrophe!", and mentioned in "Imaginary Gary", Vicky first started babysitting Timmy Turner when he was eight and she was fourteen. Timmy had found a flier advertising Vicky's babysitting service, and panicked and called this number when his parents tricked him into thinking he was being left alone. When Vicky arrived, she convinced Timmy's parents that they could use a babysitter so they would have time for each other to go out and do adult things. From that point on, Vicky tormented Timmy whenever she babysat him, and his parents would continue to spend time away leaving him under Vicky's cruel care. Timmy became so miserable that he needed fairy godparents. With them, he was able to use magic to get even with Vicky. Even with his fairies, Timmy is still challenged by Vicky over the course of the show.

She has also worked other non-babysitting jobs, usually if they involve hurting others or holding sharp objects. Oftentimes when she is introduced, the simple act of saying her name would cause thunder and lightning to flash in the sky, or a person would be nearby playing frightening piano music. In the episode "Vicky Gets Fired", Vicky is fired by the Turners for taping over a recording by accident, rather than for her torment of Timmy, but it is revealed that any other line of work Vicky takes only makes her more evil and powerful, so Timmy opts to keep Vicky as his babysitter instead. In the episode "When Losers Attack", Vicky is seen working at the Cake 'N' Bacon restaurant as a waitress, where she agrees to help Dark Laser, Mr. Crocker, and Foop to get rid of Timmy. Together, their group is called the L.O.S.E.R.S. Vicky does not join the group until near the end of the episode, where they seek her help in "training" to help defeat Timmy, although Vicky seems more satisfied with simply torturing her new allies.

Vicky appears to have started babysitting at age fourteen or possibly earlier. When she first met Timmy, when he was eight, she was just as mean as she is now. It is never explained why Vicky is the way that she is, although several conflicting plots have been put forth. In the episode "Snow Bound", she reveals that she had a really rough childhood. In "Tiny Timmy", it is said that her niceness never showed up to work inside her brain. In "Vicky Loses Her Icky", the cause of her evilness is attributed to an evil bug that crawled up her butt. In the episode "The Switch Glitch", she was actually nice as a five-year-old, but quickly turned bad when she wanted revenge on Timmy for being a mean babysitter. It has also been suggested in fanon that her sister Tootie being born was the cause of her disliking younger kids, although this has never been explicitly stated. In the episode "The Masked Magician", Vicky mentions that Tootie and their parents may even consider her their enemy when Timmy asks her who would want to tie her up to railroad tracks. Hanging in her house is a picture of an infant-aged Vicky is shown with the same evil scowl she has in her later life so it's possible she was born this way.

Despite being the main antagonist of the show and a truly evil character, she has been acting nice in several episodes ("Tiny Timmy", "Snow Bound", "Vicky Loses Her Icky", "Love at First Height", "Wishology" and "Frenemy Mine", as well as the storybook In a Tizzy Over Turkey). However, a nice Vicky is a rare sight on the show in general. Unlike Crocker, who has became less evil and more comical as the show went on, Vicky became even more evil. Her exaggerated evilness has been shown in the recent seasons, to the point that in her last appearance, "Certifiable Super Sitter", Mr. Turner had somehow apparently become aware of it.

In the future depicted in A Fairly Odd Movie: Grow Up, Timmy Turner!, Vicky owns a daycare center that she apparently runs like a prison. 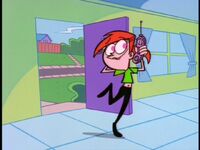 Vicky, as she appeared in the original Oh Yeah! Cartoons shorts. 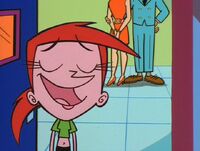 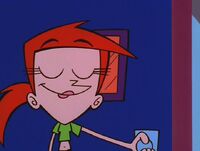 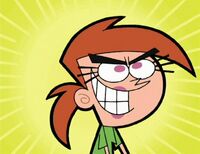 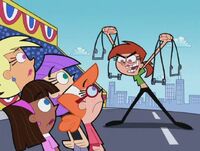 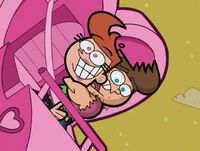 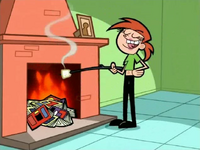 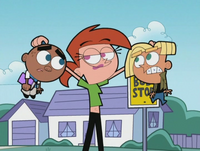 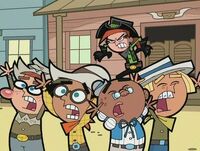 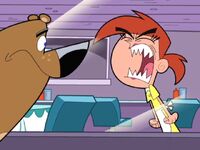 Vicky in "When Losers Attack". 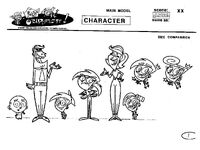 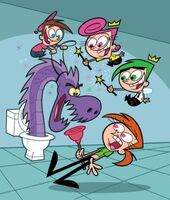 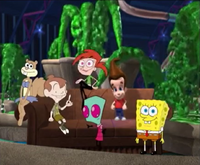 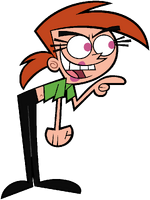 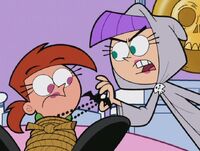 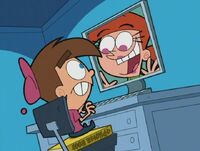 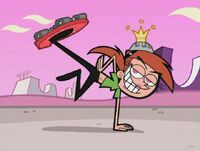 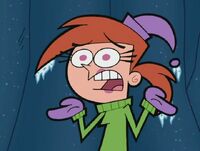 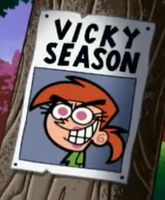 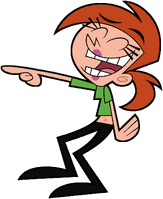 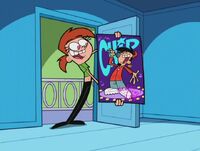 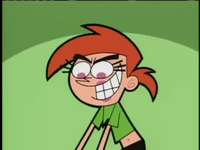