Nickelodeon
Register
Don't have an account?
Sign In
Advertisement
in: Shows, films, and people with wikis, Live-action shows, Cancelled shows,
and 4 more
English

The topic of this page has a wiki of its own: WITS Academy.

W.I.T.s Academy is an American telenovela and teen drama created by Catharina Ledoboer. It is the spinoff/sequel to Every Witch Way and premiered on Nickelodeon on October 5, 2015. The series was first announced on February 25, 2015.[1]

Andi Cruz becomes a Guardian and student at the WITS Academy, the Magic Realm's most esteemed school for witches and wizards-in-training (or WITs). 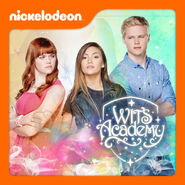