Nickelodeon
Register
Don't have an account?
Sign In
Advertisement
in: Character stubs, Characters, The Loud House characters,
and 10 more

"I've been talking about aliens since I could talk!"
Zachary "Zach" Gurdle is a character in The Loud House. He is a short kid with red hair, glasses, buck teeth, and freckles on his cheeks. He wears a white-and-blue striped polo shirt, blue jeans, and white sneakers. He is one of Lincoln's best friends. He is a self-admitted nerd, obsessed with aliens and conspiracy theories (a trait he shares with his parents), who lives between a freeway and a circus.

According to the episode "Everybody Loves Leni", Lincoln started hanging out with Zach and Rusty at an unknown point, presumably between "Hand Me Downer" (Rusty's first appearance) and "Dance, Dance Resolution" (the first episode to really show Zach and Rusty as part of Lincoln's friend group). When Clyde and Liam felt left out, Lincoln brought the two pairs of friends to hang out together.

Zach's first onscreen appearance was in "Overnight Success", as one of the schoolmates whom Lincoln invited to sleep over at his house after his argument with Clyde. Lincoln figured that Zach could probably handle spending the night at the Loud house since he lives between a freeway and a circus, but after just hearing the noises from the activities of Lincoln's sisters, Zach turned him down. (It is unclear where this episode took place in relation to the above-mentioned background detail about how Lincoln brought his friends together.)

He appears again in "Lincoln Loud: Girl Guru", where he is one of the many boys seeking advice about girls from Lincoln. Lincoln then suggests he learn basic chemistry in order to get Kat to like him, much to his displeasure. Later, he accidentally burns Kat's braids in an attempt to impress her with his chemistry skills. He then points to Lincoln, saying he told him to do it.

In "Dance, Dance Resolution", Zach, alongside Liam and Rusty, are seen unsuccessfully trying to get dates for the school's Sadie Hawkins dance. Later at the dance, Lincoln and Clyde recruit the trio's assistance, by having them handle the former's four dates, while Lincoln tries to hide from Ronnie Anne. Zach ends up having a good time with Giggles.

In "Study Muffin", he can be seen giving a gift to Ms. DiMartino.

In "Making the Grade", he, along with Rusty and Liam, refuse to let Lincoln sit at their lunch table, due to Lisa's smartness.

In "Back Out There", he, Clyde, Liam, and Rusty notice that Lincoln is standing outside Ronnie Anne's old house, and think that he is struggling with post-breakup blues (actually, he's waiting to pick up a package Ronnie Anne had sent there). They help him try to get over her by doing several activities together, and to find him some new girls.

In "Yes Man", he, Clyde, and Liam plan on attending a VIP concert featuring SMOOCH. In the end, they skip this concert (due to Lincoln not getting money for his ticket) to attend the VIB concert at Lincoln's house along with the SMOOCH members that the Loud sisters arrange for Lincoln as an apology for taking advantage of his selflessness.

In "A Fridge Too Far", he tells Liam he got corn for the answer on the test.

In "Fool Me Twice", he wins a game of tetherball against Lynn's stunt double.

Zach's parents make their first appearance in the episode "Stall Monitor", in which it is revealed that Zach inherited his obsession with the supernatural from them.

As of the show's fifth season, Zach and his friends now attend Royal Woods Middle School, where they are students in Ms. Salters' class (except for Lincoln, who is instead in Mr. Bolhofner's class because he was unable to get a spot in this class and there's no room left). The group also became the school's morning news program staff (which Zach's mom was notably part of when she was his age) in the episode "Kernel of Truth". He also got his most prominent role to date, in the episode "Zach Attack". 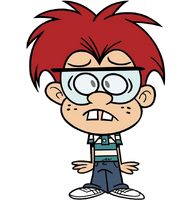 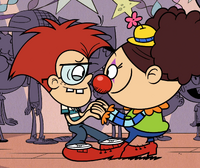