"I'm Zelda Van Gutters, the magazine's roving reporter. Look for me throughout the issue."

She would also appear in the occasional picture comic "Ruffing It". The comic first appeared in the Holiday 1993 issue (the third issue of the magazine) and continued for many years, all the way up to its last issue in 2009.

For some reason, she didn't appear in Papercutz' rebooted version of the magazine, presumably because the dog who portrayed Zelda possibly passed away.

Zelda Valentine front and back, February/March 1994

January/ February 1997 "I've been known to toss my cookies" 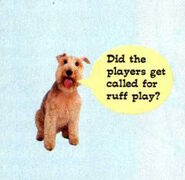 March 1997 "Did the players get called for ruff play?" 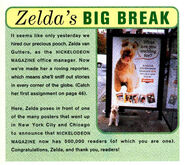 Zelda on a bus shelter poster to announce that Nickelodeon Magazine had 500,000 readers in 1995.

November 2005 - Nickelodeon asked fantasy artists to draw their fantasy version of Zelda Van Gutters.
Add a photo to this gallery 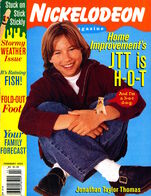 December 2000
Add a photo to this gallery
Retrieved from "https://nickelodeon.fandom.com/wiki/Zelda_Van_Gutters?oldid=230255"
Community content is available under CC-BY-SA unless otherwise noted.